Devil’s Tower is one of the places I have wanted to go since I was a child.  I, like many of people of my generation, was first introduced to Devil’s Tower in the film Close Encounters of the Third Kind.  I still tend to think of it as “mashed potato mountain” thanks to the brilliant acting of Richard Dreyfuss.  As disappointed as I was with Mount Rushmore (yaaaawn!  My husband commented that he felt like cattle being forced through a kill shoot) I was in utter AWE at Devil’s Tower.

Geologically speaking, the tower is made of dolomite from an ancient volcano.  What we see now is the bare skeletal leftovers of a cooled and solidified conduit, or magma chamber. I’m unsure of the exact terminology to use. It wasn’t the giant pool of molten rock, it was the molten rock that went cold in the pipe. Everything else has weathered away.

Hopefully you can read the sign.  The layers are such notably different in color. It makes a very striking contrast where the two layers come together.

I like the geography of South Dakota very much, but I am absolutely in LOVE with Wyoming!  I can also see why Devil’s Tower so easily captures the imagination. Wyoming is full of these rolling hills of white sage dotted with antelope and the occasional buffalo… and then reaching up to the sky, visible for dozens of miles, is the tower. It is so out of place and so different from anything else around it that your eyes are drawn to it compulsively. You watch it grow larger the longer you drive towards it, and it just never seems quiet real. You spend hours just watching it grow, and then when you get to the base of it, it just blows your mind. It is not at all difficult to see why it is a sacred site for local Native American tribes. It is almost a spiritual experience being there.

When you finally get to the park, you have to drive through some very large prairie dog towns and I decided at that time that I wanted to die by prairie dog cuddles. Not only are they adorable, but they are shameless moochers.  They will stand right next to the signs that say “Do not feed the prairie dogs” with their little pot bellies sticking out and mooch. SHAMELESSLY mooch.  If you don’t feed them, they just hustle closer to you or your car and then start barking at you! “Hey! Hey!  Gimme food!  LADY!!!”  I love them beyond belief. I can watch the little guys for HOURS, and be very content.  At one point, I realized that all mothers, no matter what their species, deal with the same crap from their children. A baby little prairie dog started wandering over to me and his mother started barking. He just kept on heading my way (and I would totally have pup napped the little guy!) when she finally ran over, grabbed him in her mouth and drug him back to the den. Who hasn’t been there with their offspring?

When you get to the base of the Tower, you really start to understand how freaking HUGE it actually is. There is a trail that leads up to the boulder field, which is an accurate description and a broken leg waiting to happen. Even at the boulder field the brain has a hard time processing the size and scale.

There is climbing allowed without permit in the boulder field, but if you want to do any climbing on the tower itself, you have to have a permit from the park office. Part of the trail is paved to make it handicap accessible, and the trail runs around the base of the tower on the east side.

All along the trail, across the boulder field and in the trees were prayer bundles left by Native Americans. The park asks (and seriously, don’t be a douche) that you do not disturb the offerings. I saw many strips of red, yellow and black cloth.   My husband is Chippewa (like actually, literally a card carrying member of an actual tribe, not the phony made up pretend “Indian”) and we wondered if the colors had a similar relation to the Chippewa religious cosmology. 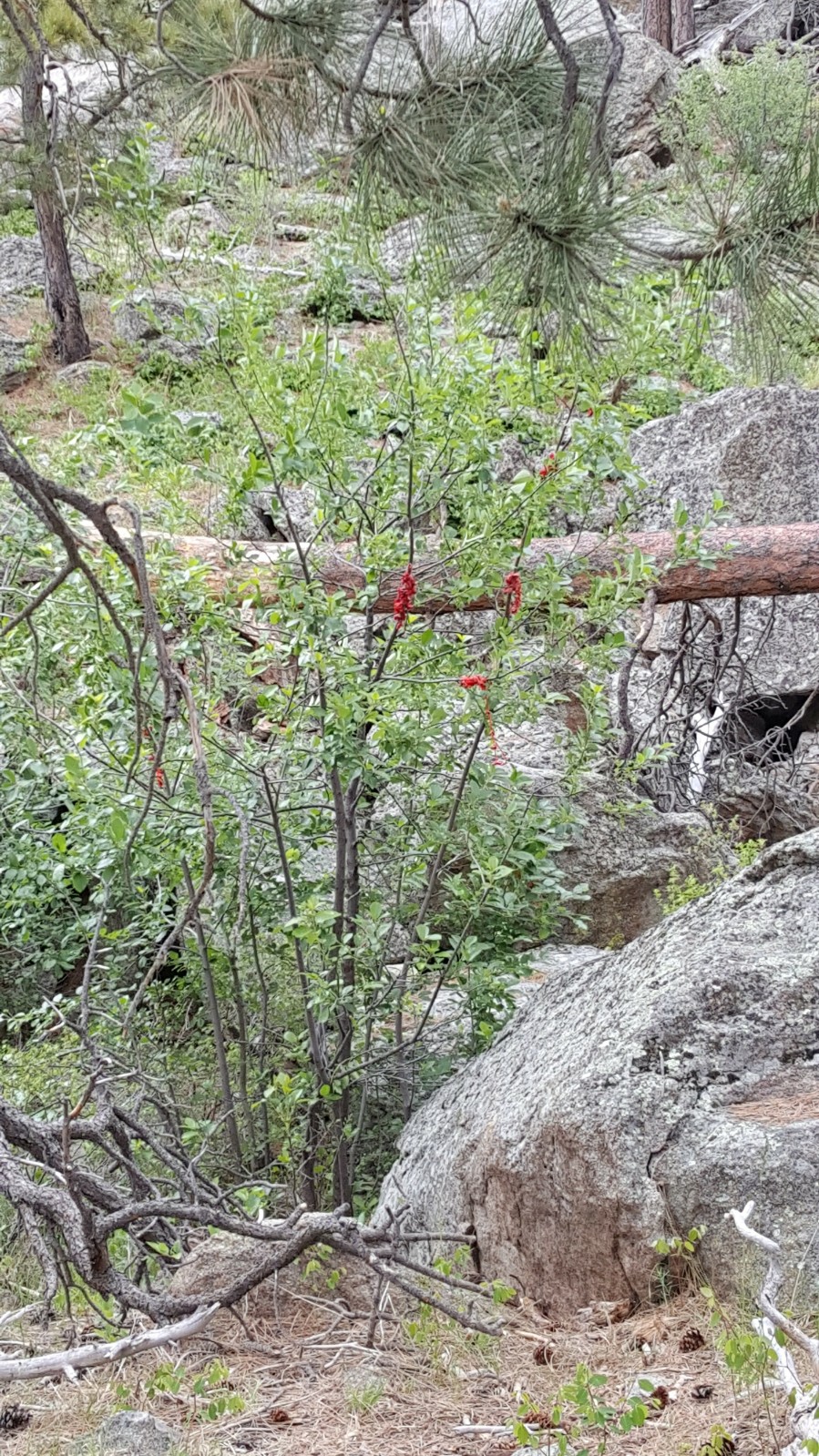 The view from the east side as it looked out over the plains was amazing! It felt like you could see forever. That’s one of the things I like about Wyoming. There are plenty of good vantage points to see for miles. Everything looks like a poster for the national park service or a postage stamp. 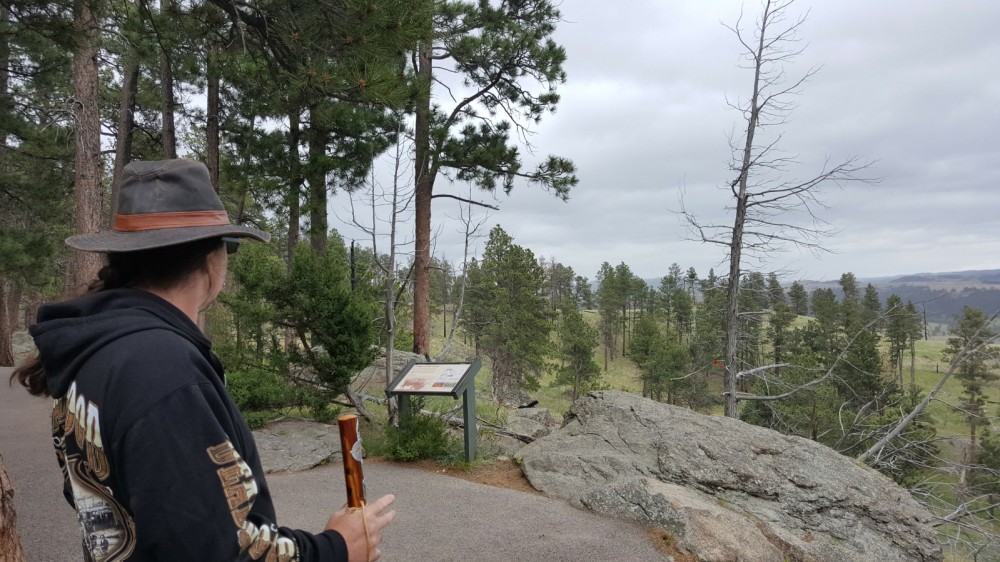 As we skirted the base, it started to rain, and we went to check out the campground to decide if we wanted to set up in the rain (which we were not even remotely excited about doing, since it was very cold) or drive a little way up the road to the town of Hull.  We were in the campground and completely unenthusiastic when my husband tapped me on the shoulder and said, “hey, you should look over there.” Pointing to the field behind me.  Then this happened.

Yeah, so there were a couple of buffalo in a field being harassed by the herd of long horns they apparently offended with their presence. Hey, there is a few thousand pounds of meat that can kill you… what do you do? You walk towards them making high pitched squeaking noises because that freaking camera in your hands is totally going to keep them from killing you! Right?  RIGHT!!

To my husband’s credit he didn’t grab me by the collar and drag me back to the car. He just got that extremely frustrated and overly placating voice he uses when I am dong something unwise or he is talking to toddlers and said “Dear… you are way too close.. would you please get in the car?”   He was absolutely correct. They were already annoyed by the long horns, so the stupid human standing within charging distance taking their picture COULD have been a good way to take out their frustrations.

As we were on our way out of the park, we stopped at this beautiful sculpture below the tower. It is an homage to the Native religious beliefs and represents a smoke ring that encircles the tower, when veiwed from below. It is supposed to look like this:

As mentioned previously, the weather that day was total crap; raining, cold,  and rather unpleasant. The net result is that the sculpture didn’t look like that picturesque signage. Not at all. This is what I got:

The upside was that I had to walk through a prairie dog town town to take the picture, and that was amazing.  I was giddy (they make me crazy happy) and it was raining, so we decided to go to Hull to find a motel, and a warm bed.