Early Monday February 26, 1979 I was with my class in the courtyard of our school in St. Louis, Missouri. We had squares of construction paper with a small hole pierced in it that we held out eagerly in front of us to monitor the progress of a partial solar eclipse. Well, it was a partial in St. Louis, anyway.

Many of my classmates grew bored and began to horse around. I was far from bored. In fact, I was mesmerized by the shadow of the eclipse on the ground, and before I knew it, it was over. I was deeply unsatisfied with my experience. I wanted to SEE it, not see the SHADOW of it. I desperately wanted to see it again, with my own eyes, and I recall being so sad, and hurt when my teacher said I would have to wait another thirty eight years. I mathed that out and that meant I would be FORTY FOUR YEARS OLD!!!

That sounded like an eternity to seven year old me. I’ve thought about it for 38 years. I can still recall the feeling of the paper in my hands on that February morning and the feeling that I had glimpsed the edge of something remarkable and I wanted to see it again. It was though I had peeked through the key hole of a great, indescribable mystical experience, and I wanted more. August 21st, 2017 couldn’t come fast enough.

Starting in late 2016 I began to planning to find the best location to see the total solar eclipse that was going to pass across most of North America. I could choose to go anywhere, but I had several things that were important to me: peace, quiet, nature, and people I love. The last thing I wanted was to be surrounded by loud obnoxious yahoos being stupid during a rare celestial event.

The internet, Google, and Google maps has made so many of my adventures over the years possible, and wonderful. You can accomplish so much togglong between the three of them. For the eclipse, I spent literally dozens of hours poring over this NASA map side by side with Google maps and Google Earth trying to figure out where to go to experience this. 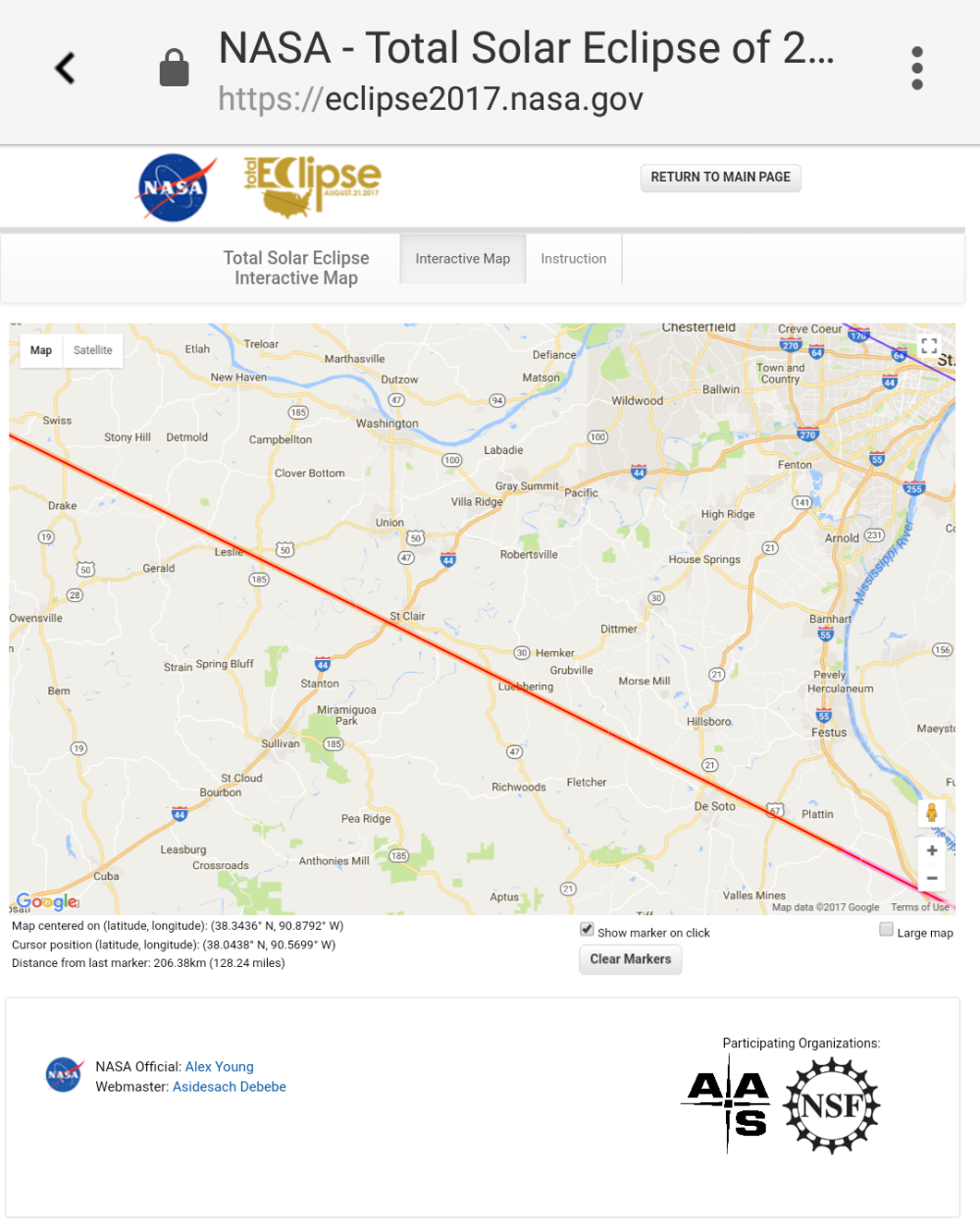 I googled large events and systematically marked them off the map. Literally. I have a lot of friends in several of the states along the path of totality, but there were so many huge events going on along the path, I ultimately decided against it. If they were making a big deal of the eclipse, I wasn’t interested.
I finally found what I was looking for- a rural area that was only a few hours away in neighboring Missouri (I no longer live in that state anymore). I chose a location where the center line of totality crossed the Meramec river, just outside the rather small town of St. Clair, Missouri.

The eclipse centerline where it crossed the Meramec River.

St. Clair is along the historic Route 66 and is a very nice little town. They were in the path of totality, and the town scheduled all sorts of events for the occasion. I had no interest in the events, but I certainly found the idea of being in the middle of the Meramec River on the centerline extremely appealing. I also rather counted on most people being drawn to the events in the town and NOT being on the river.

I managed to find that exact location on Google maps; it was at the upper right hand side. Sadly, it was in the middle of the water. I should have expected that, however, there was a series of very large gravel bars near the center line. The difference in totality was only in the start of the event, and by only one second, with the same duration. That seemed tolerable. Since I didn’t fancy setting up a telescope in the water, and a second wasn’t that large of a variance, I chose this large gravel bar very early on. It just became a question of how to get there. Satellite image of the path of totality and the gravel bar to the north that we chose to set up on.

Many people were downright pillaging the event. Some places were charging $40 to PARK in the path of totality. Hotel rooms were charging $1000 or more! Imagine how delighted I was to find a campground very near the centerline that was not taking utter advantage of the situation!
I found Shady Beach  campground just 2.5 miles from the center line, and gracious me if they didn’t also have canoe and kayak rentals… at the same rates they did every other day of the year!! I called back in June to make reservations and they were sadly already full. I’m not the only one that knows how to use Google maps it would seem.
The good news is that they had a secondary campground five miles away on the Meramec called River Rat Frog’s Landing. This made things even better! I figured we could just drop in at River Rat and float down to the gravel bar, set up our equipment, watch the event and then float down to Shady Beach. Perfect!

Something I was really concerned about is that one member of our party was being treated for a severe injury and another has chronic health problems meaning that my daughter and I were going to have to do all the heavy work. We were both pretty confident that we could handle it, but to be sure, my husband and I went down a few days early to make sure that everything would be flawless the day of the eclipse. It was a good thing we did, because we discovered that the river actually flows north there.
Where we thought we could drop in at River rat, simply float down to the gravel bar, set up, enjoy, pack up and float down to Shady Beach, we discovered that was not even possible. If we put in at River Rat, it meant that my daughter and I were going to have to muscle through 2.5 miles of river, against the current in canoes full of equipment and passengers. Problematic.  It was a good thing we went down early to work it out!

This is where I cannot say enough about Shady Beach! My husband and I drove up to that campground and explained what we were trying to do. They seemed impressed with the binder of satellite images, and the map of path of totality.  They knew generally where the centerline was, but the second I showed them the images, they knew exactly. They offered to take us, and our equipment by boat! No paddling against the current; very exciting.

With that worked out, we drove into St. Clair to enjoy some of the events in town and get some dinner. We ate at a delightful BBQ restaurant, and wandered around the town a little. We purchased some eclipse related items, and it was very clear the town had been planning this for some time.

Our daughter and friend (with adorable little dog) arrived Sunday so we had a fun evening of s’mores (including sweet and salty s’mores made with Pringles… try it!) and giddy excitement.

My daughter talked me into the two of us going up to Shady Beach in the morning and renting a canoe and meeting the others and equipment so we could spend more time together. You want to test a relationship? Get into a canoe together. Any relationship. Want to hash out your teenager’s angst at the world? Want to bond with your parent? Want to know is s/he is *THE* one? Take a canoe trip. I’m not kidding. If you are still on speaking terms afterwards, then the relationship has a chance.

It took my daughter and me about an hour and a half to reach the gravel bar (we only bickered a little, and were still on speaking terms).  They were already set up when we got there. They may have rubbed their relaxation for the previous hour and a half in a little bit while we were covered in sweat and exhausted. 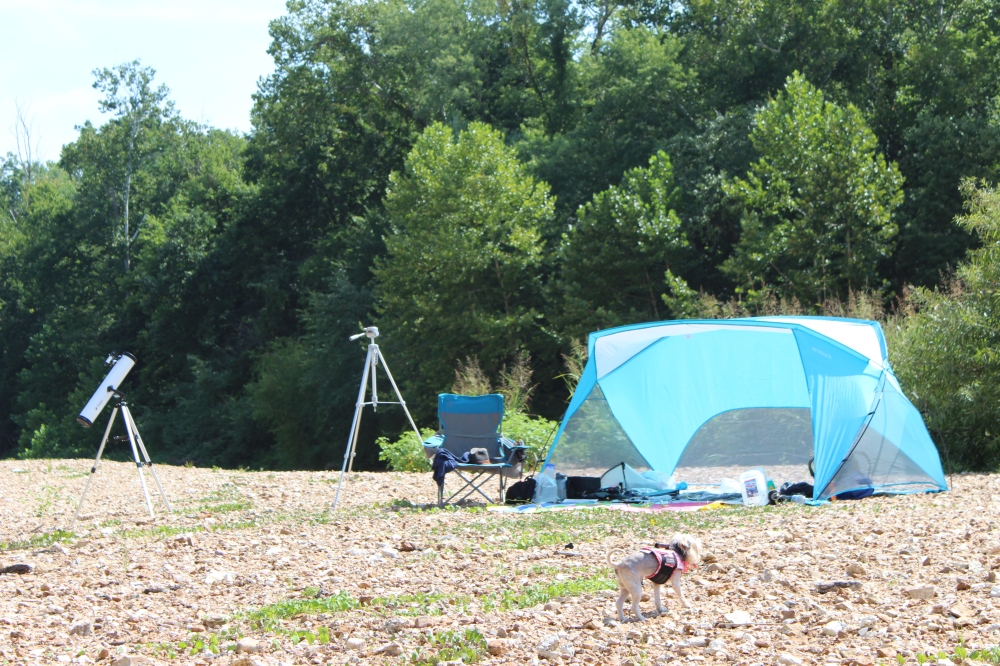 We had a 76MM Newtonian telescope, with a Galileo solar filter, Rainbow Symphony eclipse glasses, a pretty large camera and tripod set up, a portable weather station to monitor the temperature changes from the moment we got there, until the eclipse (FYI, it was freaking hot. SO hot.) a sun shade, chairs, water, and a giant backpack of junk food (that was my daughter’s doing).
There were people along the river, but they were spread out. Many people floating by pulled out when they saw the telescope ask to take a look at the sun with the solar lens. People are often wowed. I know I was, and continue to be. I just want a bigger one now. With more gizmos, and better camera attachments, and stabilizers, and maybe some computer aided tracking so you don’t have to manually track an object.  When you are looking at Saturn and it’s rings and bump the telescope, or even BREATHE on the telescope, it makes the image jump unless you have good stabilizers.

One of the things that drove me nuts pretty much right off the bat is that the temperature worksheets I had designed and brought were useless because I somehow managed to not bring a single writing utensil. Not one. Great. I ended up having to take random photos of the weather station right up to the event.

Using the telescope, my husband managed to see the very beginning of the eclipse long before the rest of us could. Unfortunately, the trip bumped our telescope mirror off just enough that photo attachments wouldn’t line up in the telescope anymore. The only way we could take photos was to carefully hold the cell phone up to the eye piece and somehow hold it in the right place, focus and take the picture all while the telescope had to still track the moving sun, and not bump it. Very challenging.
My husband is the pro at tracking the telescope, and my daughter turned out to be the pro at taking the pictures, but I managed to get a few. My real skill is editing, so we all worked together to catch the event.

We were all suitably wowed and there may have even been some heart felt “WOOOOOOO!!!!!” on our part. Unfortunately, by the time totality was over, two members of our party were pretty over heated and the cooling off in the river wasn’t really helping them anymore, so the decision was made to pack up and have the boat come get them before the eclipse actually ended.

The remainder of the eclipse for my daughter and I was spent navigating down to the other campground through the surreal lighting conditions that made it somewhat harder to see objects in the river. We had one fairly scary event where a rock we couldn’t see hit the back third of the canoe and spun us around to ram directly into a tree, knocking the paddle out of my daughter’s hands, almost tipping us over. We stayed upright, got ourselves freed, and pushed hard to catch up to and reclaim the paddle. We reached the pull out point just as the eclipse was ending and took one last look as the sliver of the moon passed off the face of the sun.

Below is a video we put together of still images taken through the telescope. There is a bit of a reflection of the camera across some of the images, but they are still pretty stunning. I hope you got to experience The Great American Eclipse, and I hope that you enjoy our photos.