NEVER EAT ANYTHING YOU ARE UNSURE OF! I TAKE NO RESPONSIBILITY FOR ANYTHING THAT HAPPENS TO YOU IF YOU MISIDENTIFY SOMETHING!! 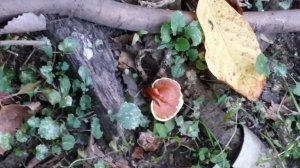 This remarkable mushroom is easily identifiable.

** CORRECTION ** Since this original post it was discovered through genetic testing that G. lucidum DOES NOT OCCUR IN NORTH AMERICA!! Blew my mind too. There is some earth shattering similar news in Cantharellus also, but that’s for another blog and day. On the Ganoderma front, what we have previously identified as lucidum is either curtisii or sessile. It is generally agreed that they have similar medicinal properties (so I have been lead to believe but I’m not responsible for what you out into your body!).

It has distinct colors, and while there is some range, it is a pretty narrow range.  It is most easily identifiable by smell and texture.

This mushroom has a rusty brown stem, typically a fan shape (they tend to get mashed and gnarled up, though, so don’t count on it) radiating lines and the edge is yellow leading to white.  The underside is white.  Older specimens may be covered with rusty spore.  The little fellow on the picture to the left was just a wee baby, so I just took a picture and left it.

The scent is a very distinctive clean sort of medicinal scent.  It has the texture of a dry kitchen sponge (unless it is old, in which case it is like wood).   This is not a mushroom for eating fresh.  Some people dry it, grind it to a fine powder and eat that powder as a supplement.  Others make a strong tea out of it.  Why use it at all if it isn’t to eat?  Because it is one of many mushrooms that has been shown to be boost the immune system, show promising results with cancer and even help people with HIV/AIDs.  I can tell you as someone who had chronic bronchitis, pneumonia, and once coughed so hard I stopped my heart and passed out (called syncope) this mushroom has been just about one of the top 10 greatest things to happen to me. 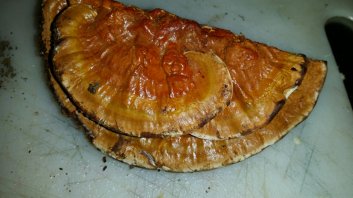 This is a larger and older specimen that is just about perfect.  Still soft enough to cut, but mature enough I know it has spored and reproduced.

These mushrooms grow so fast that they often overwhelm anything growing near.  They will envelope leaves, sticks, twigs and moss.  This example below enveloped grass in the stem.

I usually find them in bottomlands on hardwoods.  Because they tend to eat everything around them, I jokingly call them “swamp thing.”

This one has the rusty brown spore all over the cap.  It washes off, if it bothers you (but it has a lot of medicinal value itself).  I make a point of trying to knock as much spore off of them as I can in the field to help insure reproduction of the mushroom.

Once I get them home, I clean them up; a quick rinse, pull the sticks, twigs and leaves out/off them and then slice them like the photo below.  My daughter likes to make fresh Reishi tea and will often throw more oddly shaped pieces directly into a kettle with some green or oolong tea and get it simmering.  It is NOT a tasty mushroom.  It is bitter, and the longer you steep it, the more bitter it gets.

The purpose to slicing it like this is to expose as much of the mushroom to surface air as possible.  Not only for extracting the water soluble acids that do the immune system boosting, but also to help dry it.

We put it in a heat controlled convection until it is hard.  We then store it in the pantry in storage containers. This is one of the founding ingredients to my “get well” tea.  this tea is made of all medicinal elements with actual research backing up their medicinal qualities, I’m working on a recipe that doesn’t taste like poison.  I have recently decided to incorporate elderberry and Sumac to the mix and am playing around with making cough drops out of it.  I made a wonderful Sumac cough syrup recently and I think it would do a lot to make it more palatable.

Just an FYI, cough drops aren’t magic; the sugar and saliva coat your throat to smother the tickle reflex and scratchy feeling.  Mentha causes your nose to run and your sinuses to function a little better.  No real medicinal value in the way people think of medicinal value- pharmacologically that is.

I’ll be posting my “Get Well Tea” recipe and cough drops soon.  Hopefully you will have some of your own Reishi mushrooms to give it a try!