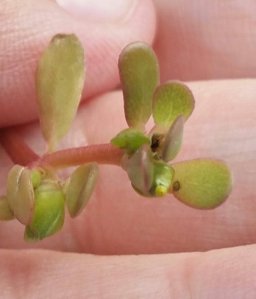 Purslane is a common weed in North America. It is an invasive species that came from the Old World. It is cultivated extensively in North Africa, Europe and Meso America.

It is edible and can be eaten as a salad green or as a cooked veggie. What makes it so special is that it is one of the highest naturally occurring sources of omega 3 fatty acids. Omega 3 fatty acid is the necessary fat that fuels your brain. You need it. This is the reason they tell you to eat lake trout or mackerel. This is a problem for vegetarians, and the purslane is a viable option. Purslane, has a lot of vitamins and minerals.

It is a widely spread plant, that is found most often near broken and disturbed soil. I have found it in strange places; finding it isn’t so much the problem as finding a good source is more the problem. I once found it on the Metro link platform.

I wouldn’t eat anything from an urban area. One of the big problems with harvesting wild edibles is that plants actually absorb petro chemicals and pollutants. You have to make sure it is a clean environment if you are going to eat anything you collect.

It is actually easier to find than it is to find a clean source for. If you find it, it is a good idea to grab some and take it home. It is super easy to grow. The flowers make little pods full of black seeds. They continue to mature after you pull it and then break once they dry. They seed themselves readily.

They can be used as a salad green, treated like spinach, used in soup and I had some pickled. It tasted great pickled.

Purslane has a thick and rubbery vine with thick, fat little leaves. It looks like a succulent. It tends to sprawl in a large round mat. So does spurge, but it doesn’t have the fat rubbery vines and leaves that purslane has. Spurge is a thin, woody vine, sometimes with thorns, and has small, oval, flat leaves. It tends to root out along the vine. Purslane tends to have a red hue to the fleshy vines.

I find that one of the great things about it is that it can be cut into small pieces and hidden in food for picky eaters. It is super good for you. I put it in spring rolls (Vietnamese spring rolls, also known as fresh rolls) and it was very tasty.

I’ve also made it in eggs, and it was good. More importantly, my kids ate it. It is a terribly healthy and nutritious edible.

You can see that spurge does not REALLY look like purslane. It lacks the fleshy qualities of purslane.

It also has the red hints, but not on the edges of the leaves like the fleshy purslane, but more towards the centers. Spurge is fuzzy and does not have the rubbery and shiny stems that purslane does.

It has thin leaves, fuzzy stems and a milky sap when broken.