Persimmons, Diospyros virginiana or the common persimmon, is one of the fall powerhouse wild edibles. Very high in fiber, vitamins A and C, the persimmon has been consumed in North America for over 10,000 years.  The seeds have been found in mega fauna coprolites. The seeds have also been found archaeologically in the trash middens of Native Americans of many tribes who ate and stored the dried fruit. The word “persimmon” is actually based on an Algonquian word. 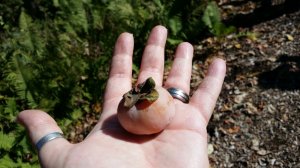 The mature, ripe, fruit is an orange or salmon color  and shaped like a slightly flattened ping pong ball. It has a small squarish “cap” on the top of the fruit that is very woody, and can be sharp on the edges. 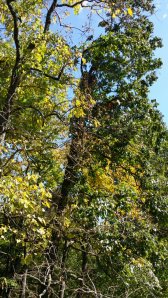 Many people consider this a largely worthless tree. The fruit isn’t commercially valuable (other species, such as the Asian persimmon are consumed in small quantities in North America; I’m talking about the native species) it produces low grade timer, and the mature fruit, while high in fiber and vitamin A and C just isn’t viable for sales. It tends to grow in dense thickets that are literally considered to be weeds in certain locations.    It is used to control erosion in some locations because of its long tap root.

When it grows a single tree, it can be very tall and distinctive looking. The main trunk has a very chunky bark. 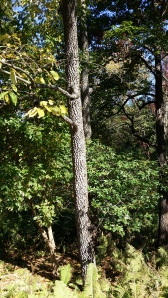 What makes persimmons somewhat tricky is that the unripe fruit (and sometimes pockets in the ripe fruit) are PAINFULLY tannic. It would be more pleasant to eat a bottle of alum, kind of unpleasantly tannic. What makes them great is that this is cured by picking the extremely soft (in other fruit it would be considered rotten) fruit off the ground in the fall or wait for the fruit on the tree to freeze during winter.

No matter who it is, no matter how much you trust and have faith in that person, NEVER EVER eat a green or pink persimmon from anyone. No matter how much they tell you that they are the best.  It’s a trick; an initiation of sorts, really. It was done to me, I’ve done it to other people…. it is mean, rotten and cruel. Also hilarious when people take a bite and make the face.

To harvest, make sure the tree has not been sprayed.  They will take it up in the fruit. I got sick as a dog once eating persimmons that I later found out had been sprayed with roundup.  You want a nice, clean, natural environment because you want to pick the soft, always partially smashed fruit off the ground. TRUST ME. It should feel like a rotten banana.  I often use egg cartons to put the fruit in because otherwise it gets smashed, slimy and nasty.  If it is after a good frost, or better yet, a freeze, you can pull them off the tree and CAREFULLY taste them. If you aren’t gagging on your shoes, go for it.  You know the whole Red means stop, green means go, yellow means look out?  Forget it!  When it comes to persimmons, it is backwards.  Green means stop, pink means be carefull and red means go for it.

Persimmons can be harvested by the hundreds of pounds.  In yesteryear, before the day of over the counter vitamins, the storage of this fruit helped stave off scurvy and blindness.

To store this fruit, there are lots of options. Unless it is right in a pile of deer or rabbit poop, don’t wash them. You will come away with super wet orange slime. You can pull the caps off the fruit and freeze them whole, or mash them and then freeze the pulp. I do this with persimmons and pawpaws alike. You can put the pulp in muffin pans or ice cube trays and freeze them in little blocks or put it in mason jars and freeze those.  Don’t try to can them.  It just gets ugly.

They make an ok jam; not great, but not awful. You can dry them, but the results can be iffy. The biggest problem is that there are HUGE seeds in the fruit. I have, with reasonable success, removed their little hats and gently pressed on the fruit on the drying tray to slightly flatten it and then dried it until it was prune like before trying to pry the seeds out of them. The seed prying part is a pain. I’ve tried removing the seeds BEFORE I dried them and had orange slime everywhere. I’ve also tried mashing the fruit in a foley and spreading THAT out to dry.  It looks a little funny when done, but worked.

To eat persimmons, you can either eat them fresh (spit the huge seeds out), use them frozen or dried in the same way you would a peach or banana. I actually find the flavor to be somewhere like a muted peach and a banana. I’ve made smoothies with the frozen persimmon cubes using orange juice as a medium. Pretty tasty.

Persimmons can get folks through the winter in dire times and has a long history of doing just that. Many a pioneer survived a harsh winter with all their teeth thanks to the fruit frozen on trees.

Interesting note, old folklore claims that they predict the weather. If you cut a persimmon seed open along the length of it, the image inside is said to resemble either a fork, knife or spoon. A fork means a mild winter with plenty to eat. A knife means a cutting winter with lots of harsh, cold winds and a spoon means lots of snow. The fall of 2013 in the St. Louis Missouri regional area, the seeds I located had a spoon. We had the most snowfall we have seen in 3 decades. Draw from that what you will!

Please try this really excellent wild edible this coming fall. Don’t eat the green ones, no matter what anyone (even me) says!!