Remember, never eat anything you are not 100% sure of. I take no responsibility for what happens to you if you eat something you incorrectly identify.

One of the more useful introduced and super invasive species ravaging its way across north america wreaking havoc in its path is the Autumn Olive or Autumn Berry Elaeagnus umbellata.   As the name implies, this is a fall fruit.

This invasive plant comes from the eastern edge of Asia.  It bares a resemblance to olive trees in many respects, though I think it looks much more like an apple in overall shape.  It has that same sort of squatty branching roundness unkempt apple trees get.  It lives in similar environments to that other super invasive and havoc wreaking plant, Honeysuckle.  They look extremely similar, and both bear red fruit.  Both, however, are NOT edible. The Autumn Berry (I prefer that term) is edible. Honeysuckle is surely NOT.

In the photo to the right, you can see that long, pointy leaves, that are smooth though veined.   The berries form on stems that tend to occur on the underside of the branch.  Sorry the pic is a little out of focus, I was trying to juggle a new phone, the branch and the setting sun all at the same time. It LOOKED focused on the screen.

The tops of the leaves are very dark green, looking like slender apple leaves.  The underside of the leaves are a silvery green and the veins extend significantly.  If you are familiar with bay leaves, they have that same sort of waxy texture.

The fruit forms in HUGE quantities, particularly low to the ground.  We often pick up the limbs and just run our hands through them like combs or rakes.  We put a bucket or basket under them to catch the berries as they fall off.

The berries are very distinctive. They look like small apples (or olive if that is where  your proclivities lie).  They have a stem and the berries are covered in little spots. The berries are not glossy and have a matte finish on the surface.  In the extreme closeup below (side note- this phone really rocks) you can see clearly the matte surface, the spots and the stems.  If your berries don’t have this, throw them down and back away slowly. 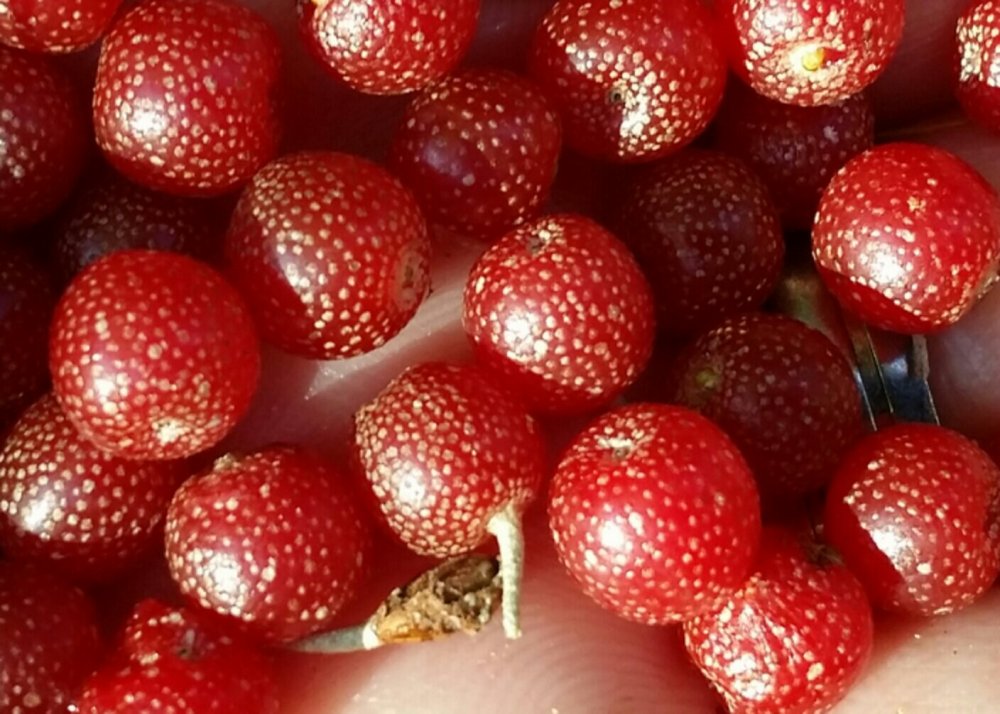 Below is a species that LOOKS similar but is NOT edible.  DO NOT MISTAKE IT!  Below is the super invasive Honeysuckle.  This introduced species is choking out woodlands nationwide.  Kill it. Kill it with fire.

Why do I hate Honeysuckle so much?  Because it is slowly smothering the woodlands. It chokes out native species, disrupts the fauna and flora and depletes the soil.  It is a menace.  While the Autumn Berry is ALSO invasive, it isn’t as bad. It also, much like legumes, is a nitrogen fixer; it actually puts nitrogen back into the soil.  While this too can disrupt native flora and fauna, it can help repair some of the damage Honeysuckle does. In the photo to the right you can see that the leaves look very similar to the Autumn Berry but there are differences.  The leaves are much wider, and are more green on the obverse side. They are generally larger leaves overall. They aren’t as smooth and waxy feeling as the Autumn Berries. The stems are a bit fuzzy on the Honeysuckle.  The berries form on the top of the branch.  The berries are VERY glossy red. They are blemish free and don’t have stems.

If you can look at the berry and see the little lines that run from the blossom end to the stem end (like a gooseberry) and form on clusters on top of the branch, it is a honeysuckle. Seriously, kill it with fire.  Stomp it into the ground. Rip it out. Just DON’T EAT IT.   Some people say not edible, some say poison. I say vermin and destroy it.

So back to the Autumn Berry. I know a few folks who eat it as is.  My kids for instance. If you like sour gummies, this is your fruit. I’m not so much a fan of sour. I usually prepare it but crushing layers in a steel pot (just like blackberries or raspberries) and add water to simmer.  When the little fruits are exploding, I strain it off and run it through a foley or chinois. The juice is extracted from the skin, seeds and stems.  The pulp goes through the mess and you end up with a product that looks and even smells a little like tomato soup.  Just sort of power through that.

Once you have liquid for a jam recipe you can use it as is.  The jam tastes like Sweet tarts.  If you aren’t a fan of Sweet tarts, you can run the liquid through a jelly bag. It goes in looking like creamy tomato soap and comes out like lemonade. It is a little freaky, actually.  Take the lemonade looking liquid and use it for Jelly.  It does NOT taste like Sweet tarts.

The jury is rather out at my house as to which is “better” but I lean towards the jelly. My kids are freaks, so there is no rhyme or reason to their tastes. My foraging buddy Shari recently found some Autumn berry wine at a vineyard. I might give that a stab. Or mead. Mead is *SO* much easier to make.   Jam and Jelly recipes to come later. Go find some berries, yo!