recently had one of the nicest morel finds of my life. I’m not one of those competitive people that counts the number of morels they get. I don’t weight them, count them or lay them out for a head count shot. I actually find those practices bizarre.  It seems to be the only mushroom anyone does that with. Have you ever seen anyone lay all their chants out?  No. At least, I never have.  I usually just take some pictures, make a halfhearted attempt to identify the species (I find a lot of the M. diminutiva and I’m ok with that) then take them home and eat them. I’m a simple creature, really.

This last spring I found a cluster of 11 in one place and they were the nicest, prettiest, and biggest ones I have ever found. It caused a traffic jam as everyone wanted to come see them. I was so nervous and excited I took crappy pictures and didn’t even think to get a picture of the arc they were growing in. They weren’t that spectacular foot high beast everyone is circulating pictures of, but the tallest was 10 inches high. It was a MONSTER!!  I found them growing in a cluster of six, a single loner and a cluster of four. They had a little frost damage on the top, but they were beautiful!!

They presented a conundrum for me.  It seemed a damn shame to cut them up into little bits. I poked around the good ‘ol interwebs for a while until I got inspired and I got the idea for STUFFED Morels. I mean why the hell not?  They had pretty close to the same volume as a bell pepper (which I can’t eat since I’m allergic to them) if not in a different shape… so why not stuff them?

I put a lot of thought into it. While cheese really seems to amplify and carry the morel flavor, I have become increasingly lactose intolerant and all the cheese in all the recipes this year has lead me to try and minimize the lactose for a while. Not completely get rid of it because I wouldn’t know how to cook anymore, but cut back on the dairy.  I turned it over in my head for a day or so, until I felt like it was do or die with the morels. I didn’t have a set recipe in mind, but I had an idea and I decided to do what I do best; WING IT!!  That’s pretty much the story of my life, actually.

Anywhoooo, I poked around and discovered that I was totally out of pasta. Not sure how the hell THAT happened, but I sent bambina numero uno to the store to get pasta of her choice. I discovered after she left that I was out of onions and shallots, but rather than call her to get me some fresh ones I decided to use up some of the dried ones I had.  I put about a half cup of dried onions into some warm water to rehydrate and set about sorting through this glorious pile of morels to decided who got chopped and who got stuffed.

I don’t want to brag, but I WAS crowned queen of the morels. For good reason. As far as I was concerned, after that one haul I was done for the season. They were beautiful, and as close to perfect as you could want. I even did the obligatory asshat photo lineup. To show off my crown!  Duhhh!!

So Down to business.  The onions had rehydrated, and my cast iron skillet (I love cooking mushrooms in cast iron) came to temperature, so I skated some high quality olive oil across it and tossed the rehydrated onions in. I gave them a few minutes, then tossed in a teaspoon of chopped garlic. After another minute, I put in a cup or so of water. That has become my new favorite method of temperature control and stick prevention.  It has the added bonus of helping the flavors meld, but I digress.

While the allium party was doing it’s thing, I chopped up all the smaller (it feels funny calling 4 and 5 inch morels “smaller” but it is appropriate in this instance!!) morels.  All of the ones  that were large enough to stuff were put to the back. I find that cutting the morels into rings and cutting the rings has a much more satisfactory mouth feel  than splitting them up the middle and then chopping.  It might be because you aren’t forcing them flat and breaking them by making them lay flat to chop them. Or it could be my imagination. Irrelevant, really.

Once the onions were cooked, I added a pound of ground free range pork that I purchased from Morrow Meadows Happy Hog Farm (find them on Facebook; really good prices for on the hoof free range pork!).

I did this because I have noticed a marked difference in flavor if there is some sort of a fat for the mushroom flavor to bind to. I made a similar morel dish, same ingredients right up until one got meat and the other was vegan. Like I literally split the cooked ingredients in half and finished them with meat and sans meat. I discovered that the morel flavor was far and away more pronounced in the dish that had meat. Similar to the dishes with cheese having amazing flavor. I’m starting to think that the morel may have a fat soluble flavor aspect to them. Not even remotely scientific and based on anecdotal experiences, but there you have it.

I cooked the pork through, then I took half out for another dish.  I deglazed the pan and added the chopped morels into the skillet; covered it and decided to check out the fridge.  I still had half a tub of whipped cream cheese, so I decided to run with that.   Once the filling mixture was thoroughly cooked, I added the whipped cream cheese and a half cup or so of milk. I stirred it until it was smooth, bubbly and delicious looking. 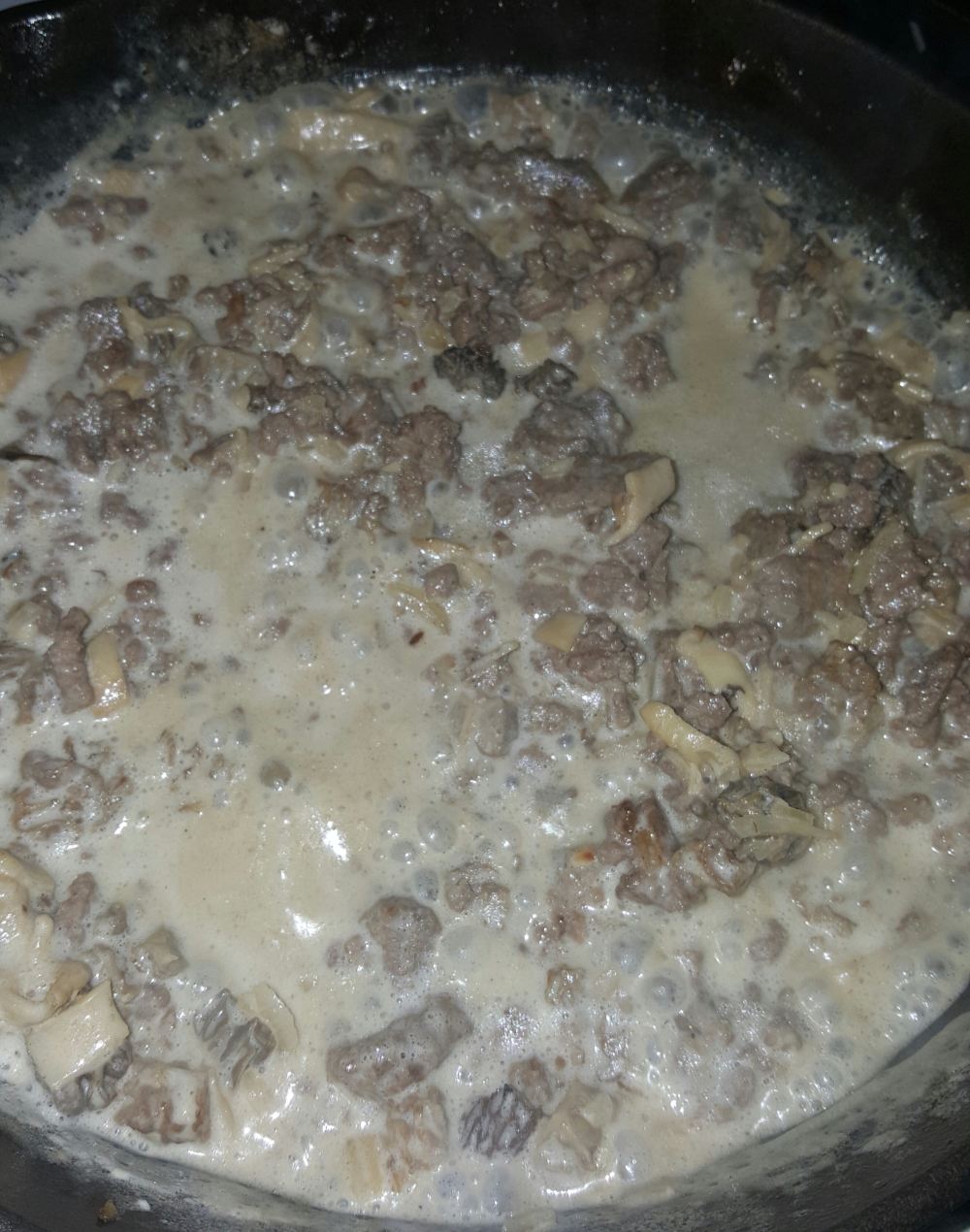 I used that to stuff my big morels.  About then my bambina came home with a box of mini farfalle.  Excellent choice!  Bite sized, but still has folds to hold sauce.  I got a pot of water boiling, and seasoned it with the awesome morel salt I bought from Larry Evans of http://www.fungaljungal.com.

I got a sauce pan started with about 2 cups of water and some salt. I carefully arranged my stuffed morels so that only the one in front was in danger of losing it’s guts and got them simmering. I used a low heat; I would rather it took longer than scorch anything.

I guess you have noticed by now that I’m not so much into measurements….  get used to that!  My cooking style might best be described as mad scientist. Drives my daughter CRAZY. She actually measures and follows directions. Pfbffbfbfbffffff!  Who has time for that?

The left over filling mixture was about to become a cream sauce.  I put a few scoops of flour into the mixture and whisked it in. Once it looked like wall paper glue, I busted out the big guns and started stirring in heavy cream. Mmmmmm… heavy cream.   Once it was smooth, I simmered it to cook the flour through and thicken it.

I drained the farfalle, added the sauce, topped with the stuffed morels and hit the road to enjoy with friends for lunch. They were DELISH!!!!! 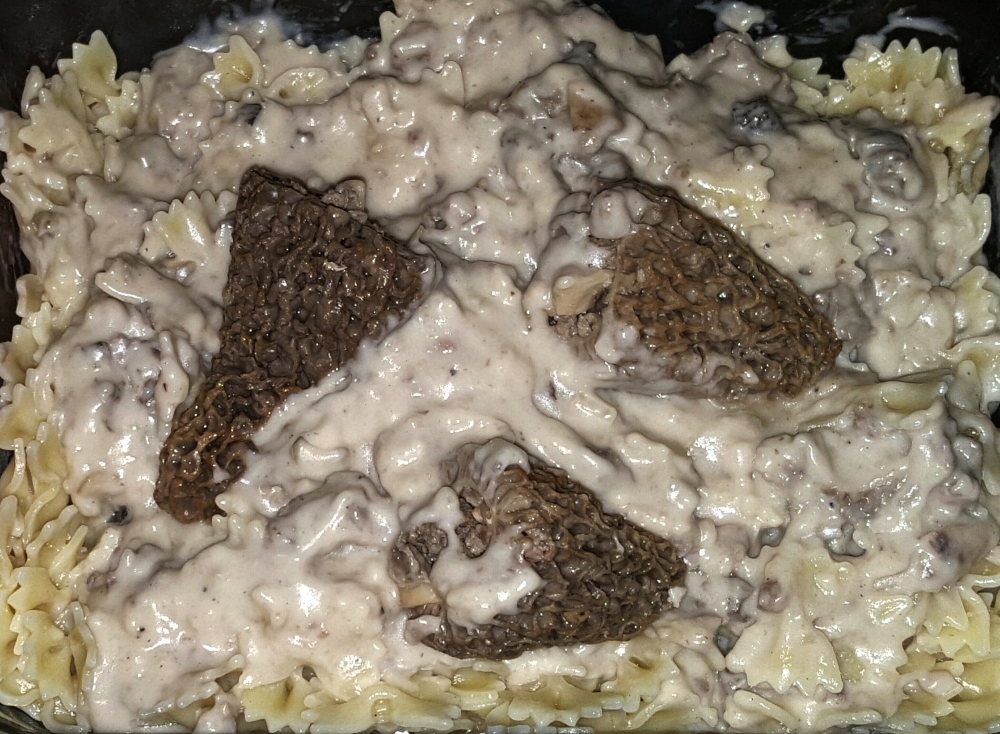 If empty plates and painfully full tummies were any indication, I nailed it!