One of the undisputed perks of foraging is that you eat a lot of high-end goods that is ultra fresh. Fresher than the upscale restaurants and grocers ever see.  It tends to make you a food snob.  It will also make you laugh (literally) at grocery store prices for sad, dried out crusty good at the supermarket.  Example: Oyster mushrooms.

Oyster mushrooms (Pleurotus ostreatus) are native to and grow wild in North America.  They are also farmed fairly easily which is the source of the sad, sorry “fresh” oysters in the stores and restaurants. I’ve tasted them.  The difference is the same as cheese and processed cheese food. In short, yuck!  No comparison!

This past weekend we went for a short little foray not really expecting to find much. We haven’t had rain lately and though the temperatures are good, the needed moisture is lacking.  We were wrong. Had we been out earlier in the week, we would have had a few dozen pounds. As it was, we picked a few super fresh clusters, a few Cinnebar chanterelles and called it good. 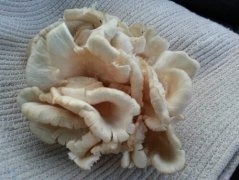 This is one of the little clusters we found.  It was pretty close to 3/4.  The other one was about 1/2 a pound.  I washed them really well since there is a little beetle that seems to ONLY live in the oyster mushroom.  Then I chopped them like this. 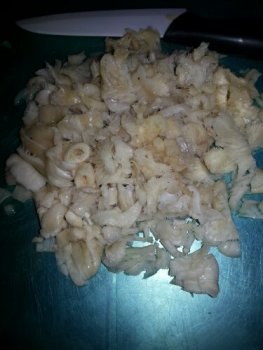 The texture of super fresh mushrooms can only be experienced, not described.  It is utterly different from the grocery store mealy offerings. You need a really sharp knife or you end up tearing the mushroom more than slicing. That leads to bruising and off flavors. I have taken to using a ceramic knife because they are super sharp; sharper than conventional steel.   We didn’t find many chants, just a few Cinnebars so I chopped them up as well and threw them in with the oyster mushrooms. I presumed that they would be lost, but surprisingly, they weren’t!  They added a nice new layer to the flavor profile. 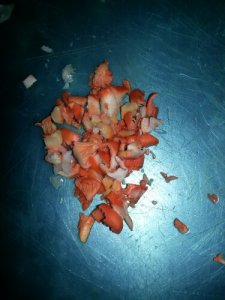 I put about a tablespoon of a quality brand extra virgin olive oil into a cast iron skillet and then added my mushrooms.  If you don’t have a cast iron skillet, use a heavy bottomed skillet; they really need diffused heat to bring out their best flavors. If you heat them too much too fast, they get bitter and fishy. 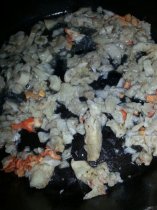 Make sure the skillet is fully heated on a low heat, then saute until they begin to turn translucent.  Do not let the skillet dry out; add a little water if needed.  You want to slow cook these for the best results.  I often turn it down to low and then go do something else so I don’t fuss over them too much. 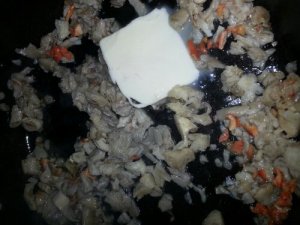 Once they are soft and translucent, add a large pad of butter. Please do not besmirch these mushrooms with margarine or anything other than real, unsalted BUTTER.

Cook until the butter is melted, on low heat.  Stir to make sure the butter is evenly distributed then add about 1/4 cup of flour.  Spread it evenly over the mushroom mixture.  Then add salt and pepper to taste. 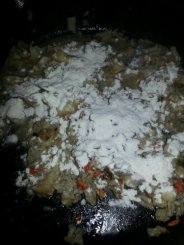 Wisk or stir until a roux is formed.  It will be a thick paste.  Stir briskly to make sure there are no lumps of  flour and any seasoning you added is distributed.

Once everything is a smooth (well other than the mushroom lumps) consistency, add about 1.5 cups of milk.  I use 2% but whole milk would work just fine. 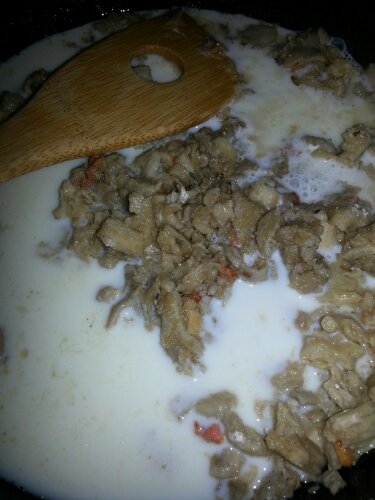 Stir or wisk over low heat until the sauce is uniform, thickens and may start to gently bubble.  Taste it. Does it need salt? Pepper?

Remove from heat. Serve as a sauce or refrigerate up to a week for later use. It freezes pretty well, so you can always prepare it for the long, lonely winter months with no access to fresh food. 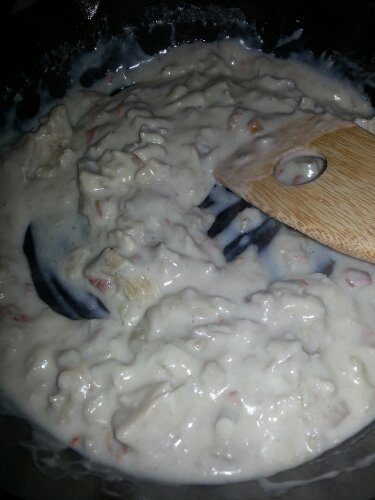 A delicious variation is Mushroom Steak Sauce.  Instead of starting with a clean pan, add the sliced oysters to a pan that a steak has been cooked in.  Add the mushrooms, and some water to deglaze the pan.  After that you treat the same as above. The steak imparts a fantastic flavor that the mushrooms readily marry themselves to.

Another delicious variation is stroganoff sauce.  Cook your beef, then saute a diced onion and a clove of garlic in the same pan with olive oil. Add the oysters and a bit of water to deglaze the pan.  Follow the above sauce instructions, then add a generous cup of sour cream at the finish.  Slice the beef into strips and layer over egg noodles and smother with this sauce.  DELISH!!