DISCLAIMER: Remember, never eat anything you are not 100% sure of. I take no responsibility for what happens to you if you eat something you incorrectly identify.

We took a little walk not too long ago, before the weather got so downright disgusting, and found, the largest, most perfect, BEAUTIFUL Laetiporus cincinnatus mushroom either of us had ever seen. This mushroom is the “Chicken” mushroom because it not only tastes like chicken; you essentially treat it like raw chicken. 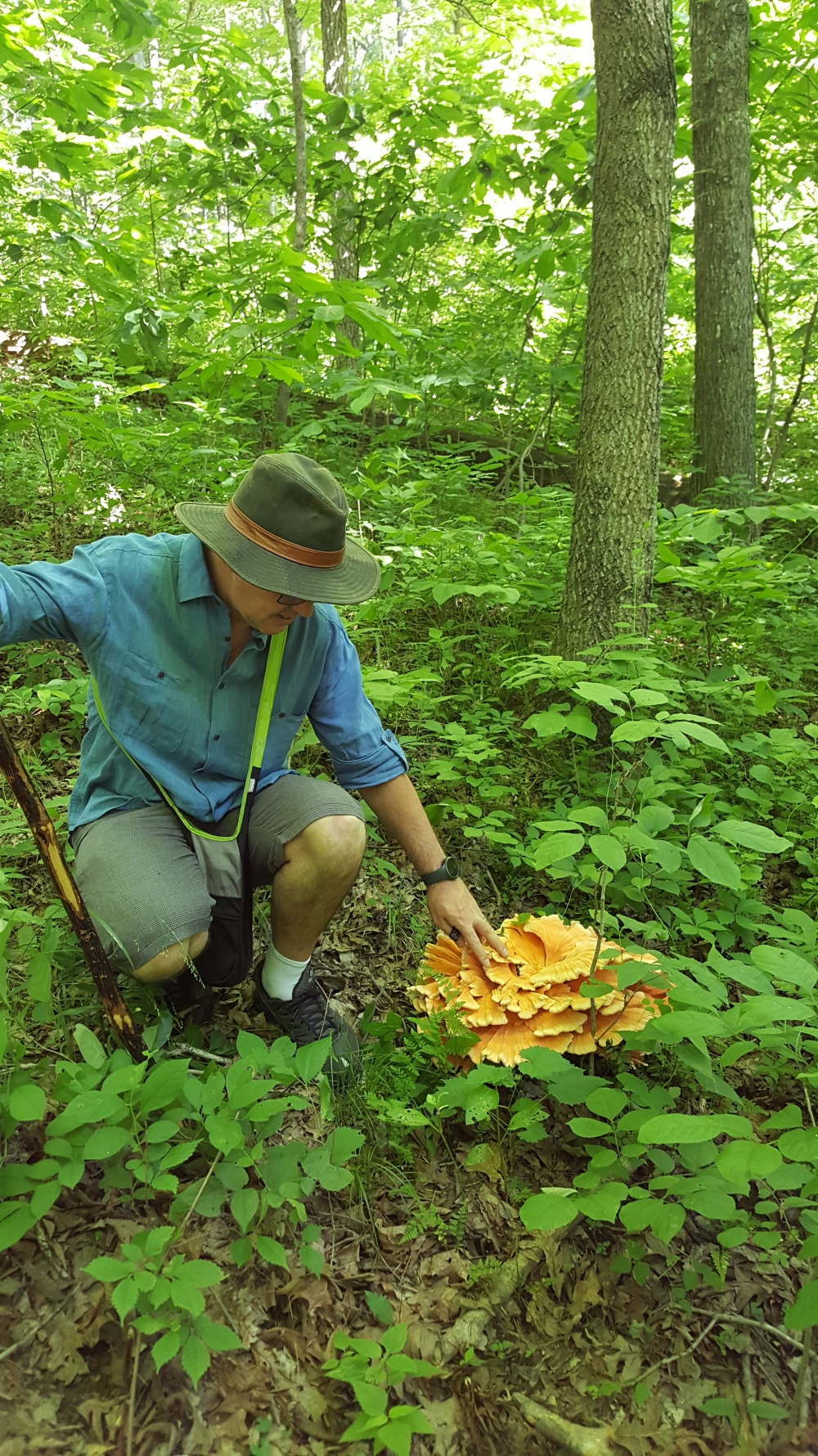 We were amazed that it was just feet off of a well-traveled and super easy trail and that no one had harvested it, which was rather surprising. We didn’t come close to collecting the whole thing. We only took about half and it was still about 6 pounds. We hadn’t even been walking half an hour, but that pretty much signaled the end of the walk at that point. I certainly was not carrying it further. Six pounds doesn’t sound like a whole lot, but they are just awkward shapes and sizes to contain.

When we got back home, I had tons of recipes in my mind. Of the two Laetiporus mushrooms, the Cincinnatus is by far my favorite. Cincinnatus is often called “pale chicken” or “white chicken” because the underside is white or cream in color. The other species, sulphureus is yellow, often in an alarming shade, on the underside. The two biggest distinctions as far as I am concerned, are that the sulphureus ONLY grows on visible wood. You find it growing on trees from mycelial mats. The other key difference is that the stem portions tend to be very tough, and you often just cut the outer edges of the fans off.

L. cincinnatus also grows on wood, but it can be from a submerged tree root and can appear to be growing from the soil. It isn’t, but it can look that way. The cincinnatus is a much more tender mushroom, and the stems remain fairly soft and edible. I still tend to leave fair amounts of the stem portions because they can continue to grow for several days after a harvest. I find that it also behaves so much more like chicken. You can shred it, steam it, chop it… any recipe that you would use chicken in, L. cincinnatus will work.

I was super excited when we found such a large supply of excellent quality mushroom. I usually have a plethora of mushrooms either dried or frozen at any given time. I definitely had plans for 6 pounds!

One of the most important thigs about mushrooms, is that if you can absolutely help it, don’t wash them. It washes away the flavor, the texture gets mealie. Don’t wash if you can help it. If you can’t cook them right away, put them in a paper bag, with a moist towel in the refrigerator.

I had dinner in mind, and I decided to make two dishes at once, because I had so much to work with. The first step was to trim it all up. I took all the discarded pieces and put them in a pot with some water to make stock; great way to get some use out of less desirable pieces.

Then I cut about 2 pounds into playing card sized pieces. I chose to do this because they are reasonably flat at that size. 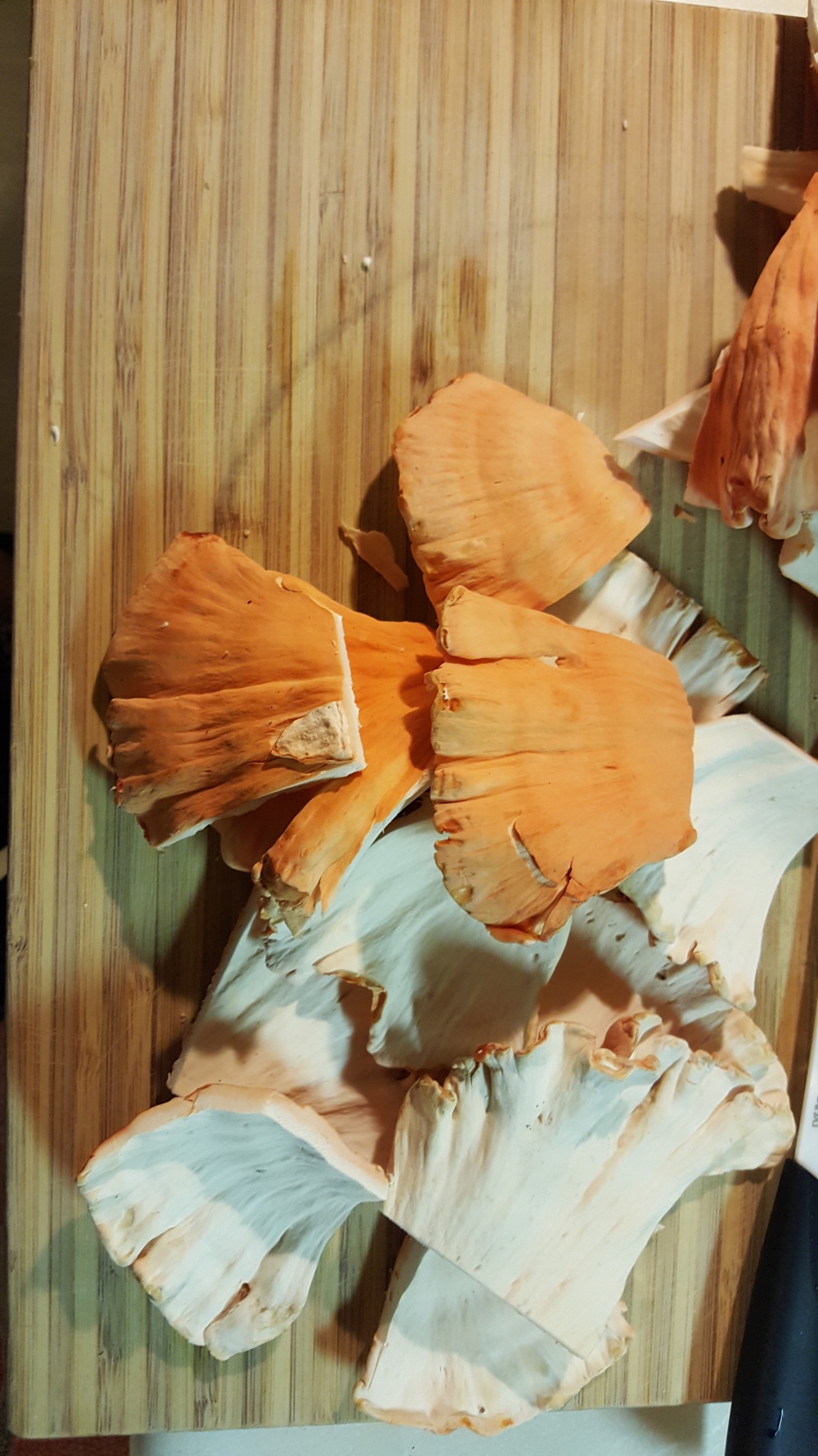 Any dirt or insects that were on the mushrooms during cleaning got a gentle brushing into the sink.

I decided to use quinoa flour in my recipe because of the higher protein content. It is still pretty carby, and I have been trying to cut back on the carbs, but the higher protein and nutrient content makes it very appealing to me. It also has a great nutty sort of flavor and crisps up very nicely. 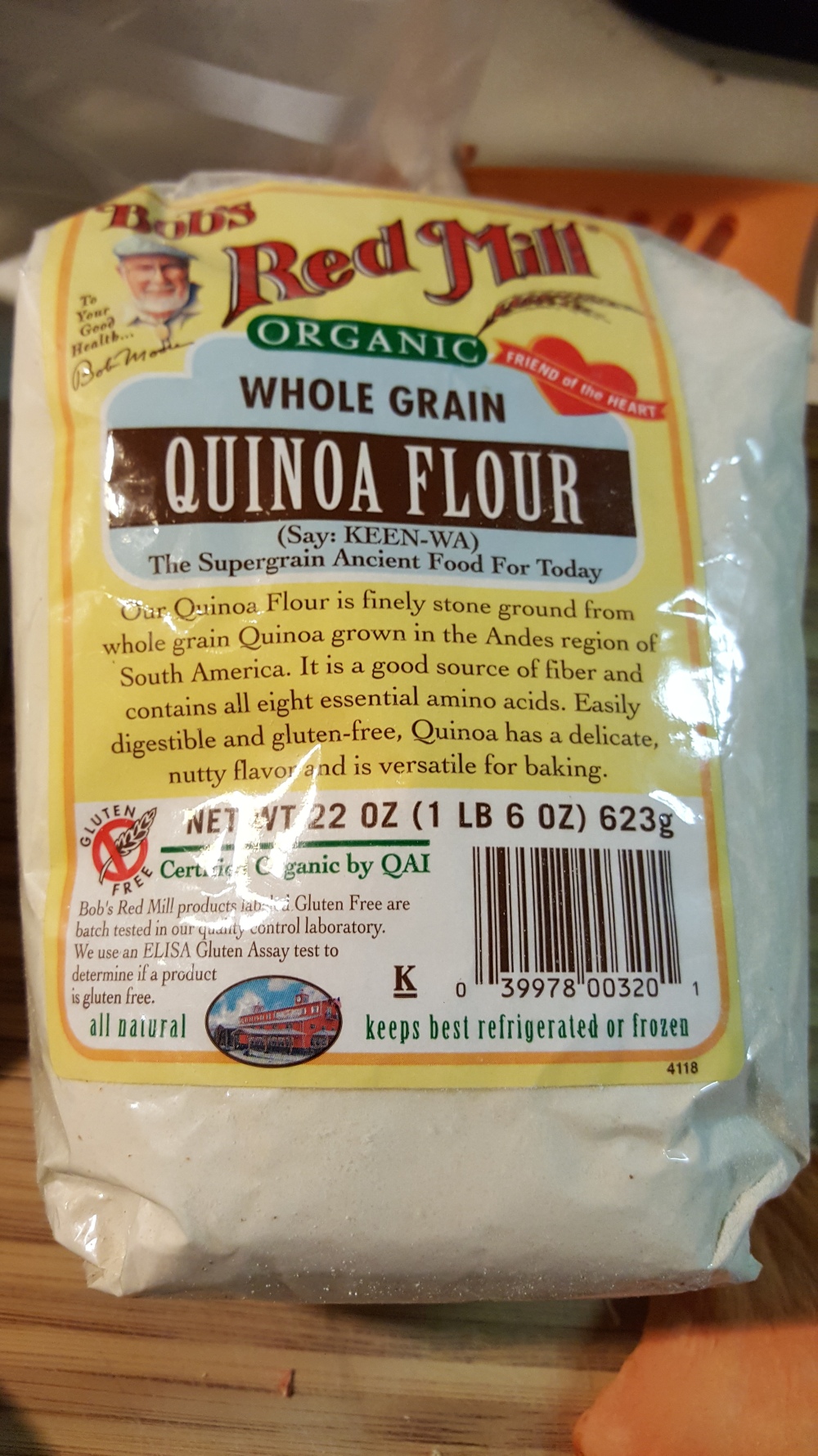 I seasoned it up with garlic, onions, and the basic mix of Italian style seasoning. Much of the garlic was wild garlic that I had previously foraged, dried and ground. 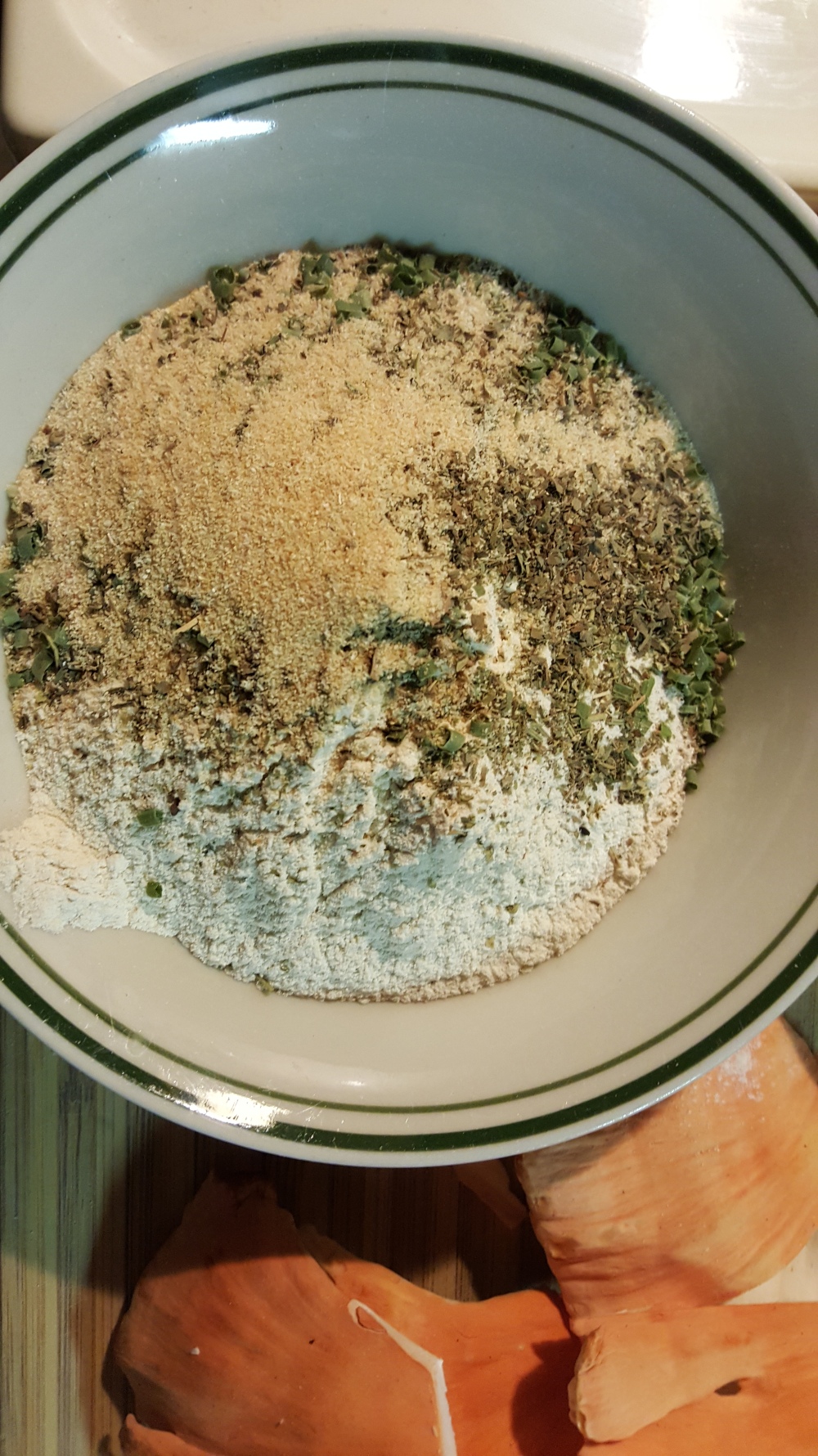 In a separate bowl, I whisked up 4 eggs. I wasn’t sure how many I would need, but they were HUGE brown eggs 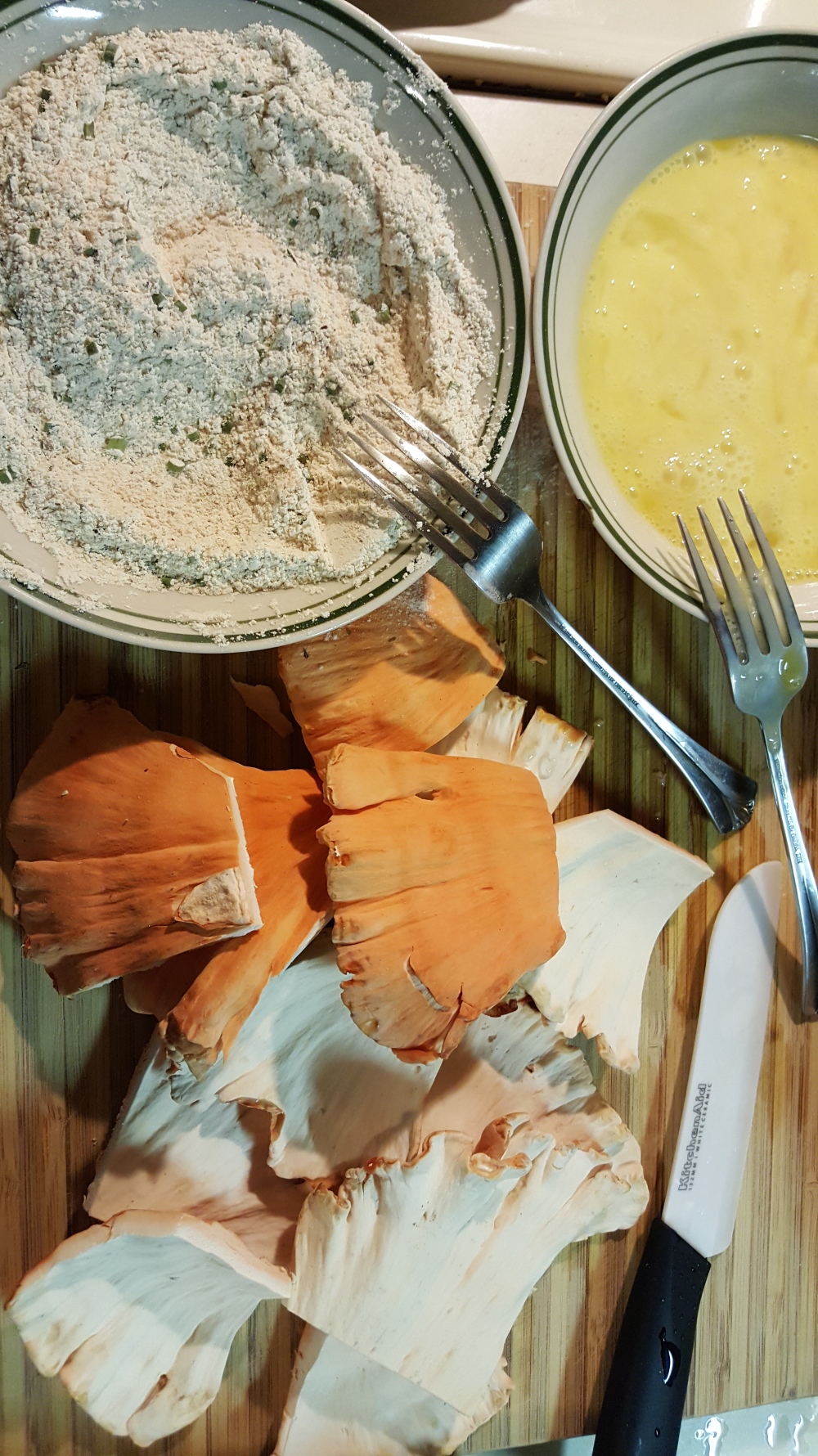 Once everything was prepped, I dipped the pieces in the egg, then floured them, then repeated the process for a double coating on the “chicken.” This is because the mushroom is texturally almost the opposite of actual chicken. It starts out hard in the raw form and gets soft. Without a decent coating, they can get limp. They really need a solid crunchy coating. 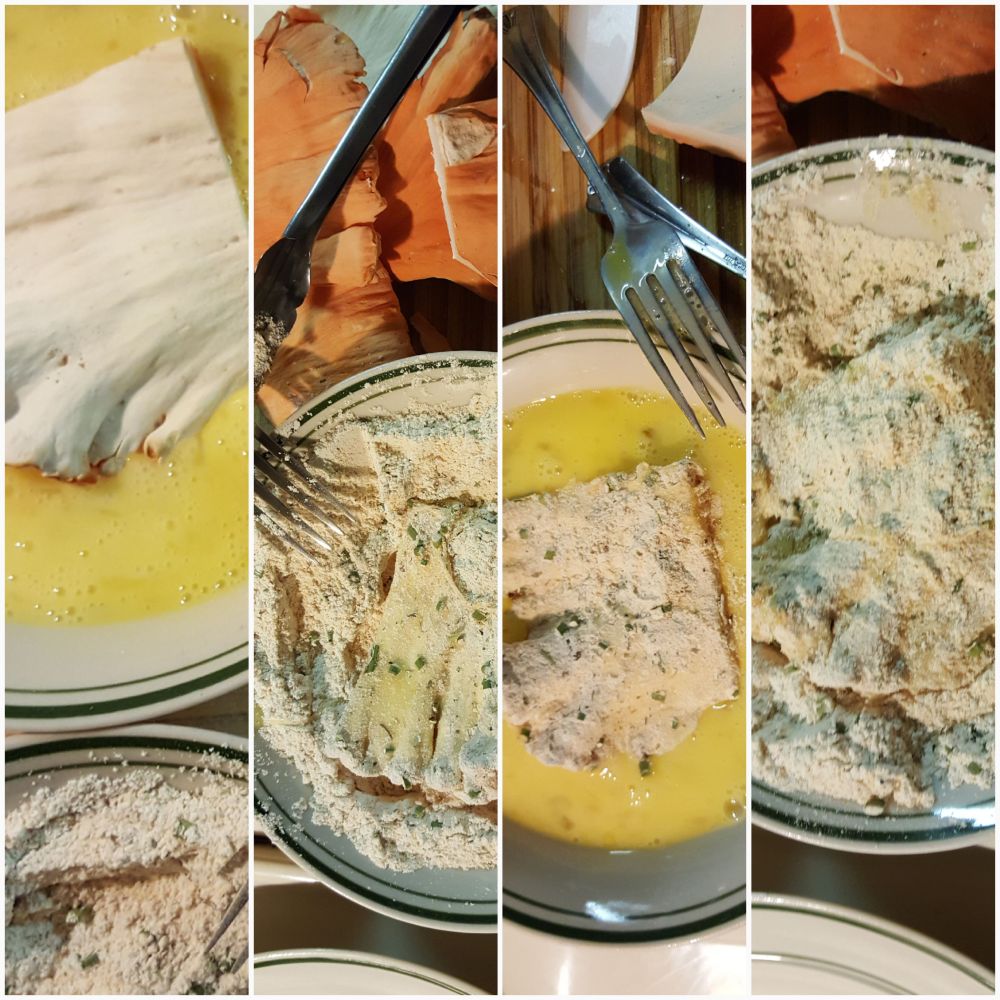 Once that was completed, I did something I said I wasn’t going to do anymore. I fried them. In my defense, it is STUPID hot outside and I was in no mood to turn my oven on. I used a good quality oil (I recommend grape seed or olive), in my favorite cast iron skillet, and let them get golden-brown. 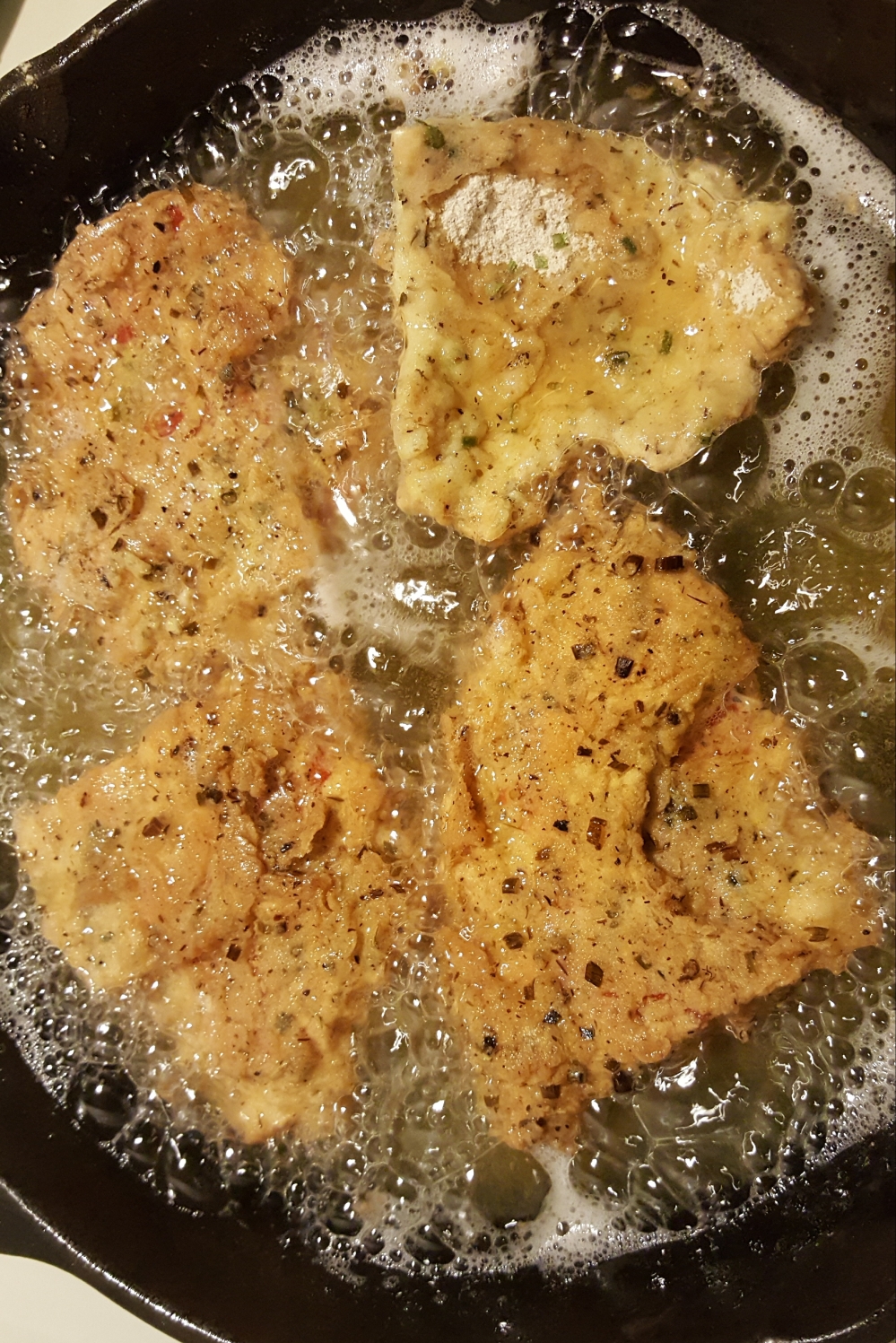 It is always a dance keeping the oil to temperature and also getting things cooked in a speedy fashion, but I managed. At one point, the oil was getting too hot, so I decided to scrape tongs off and made hush puppy sort of things. Those got munched up pretty fast. 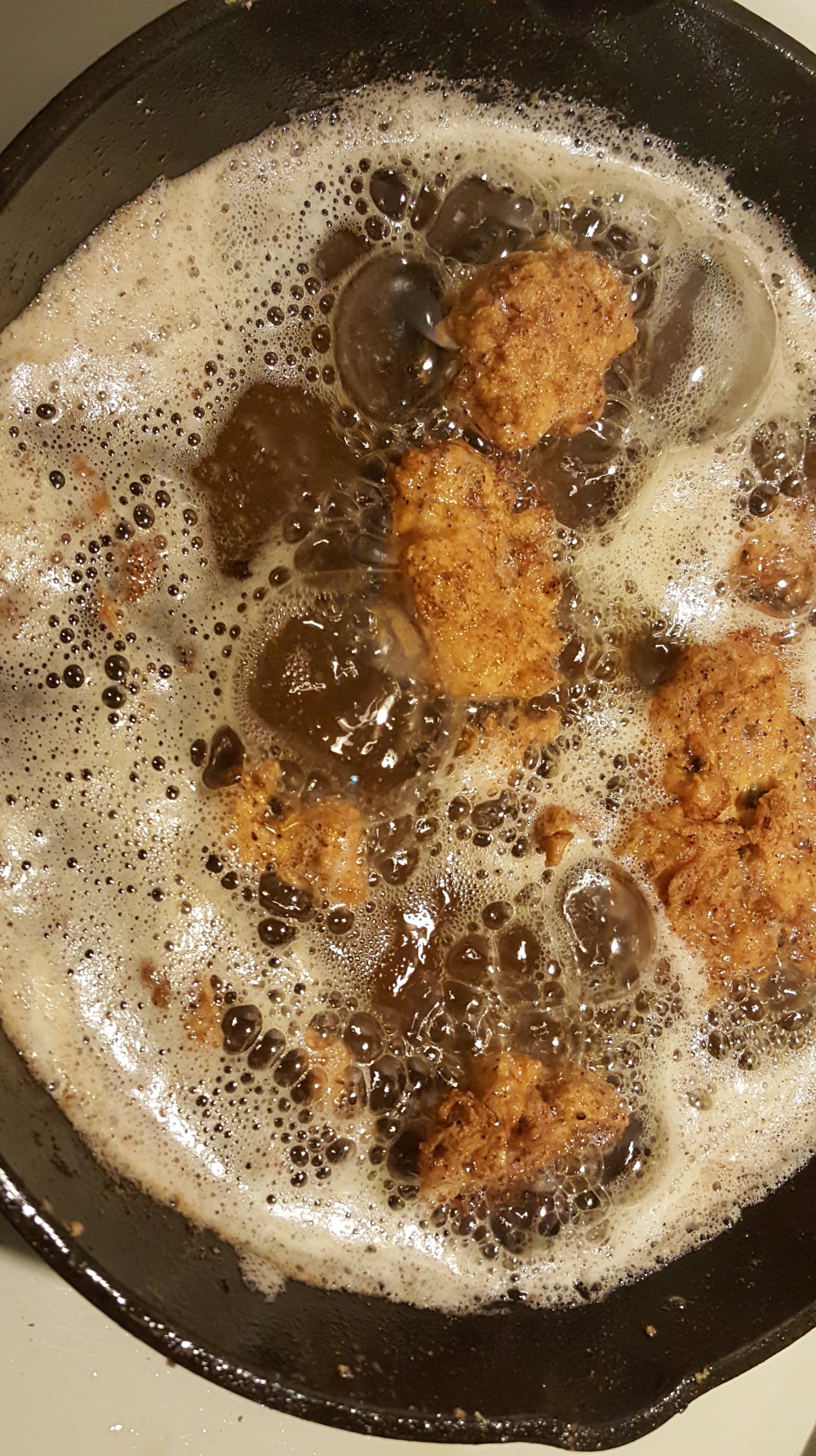 As they finished cooking, I put them on a towel to drain, and cooked the next batch. It got a little daunting, but I finally ended up with a plate of delicious fried “chicken.” It even has the texture of friend chicken, and shreds like it too. 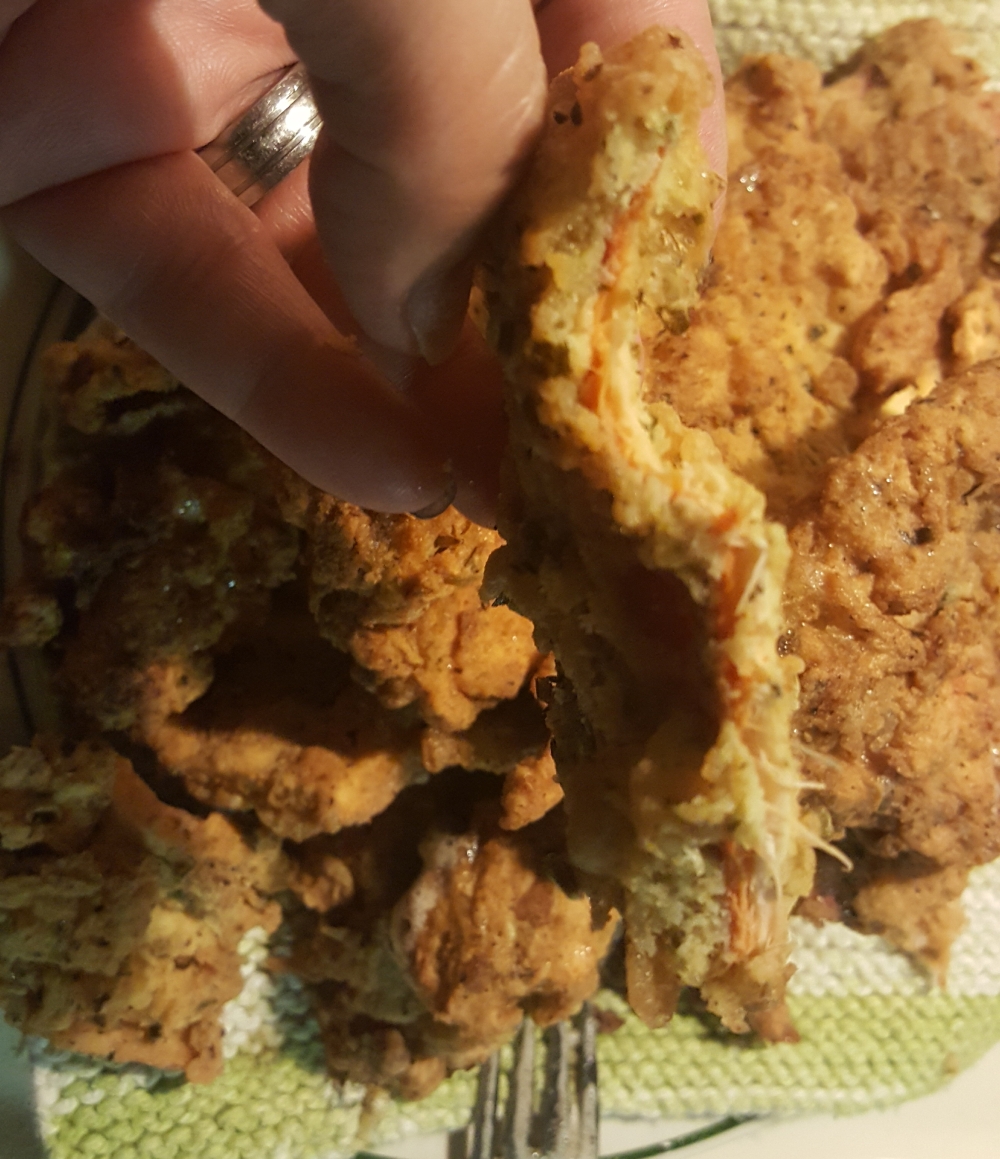 We could have stopped there and just stuffed our faces on our vegetarian fried “chicken” which are much lower in calories that real fried chicken, since the mushroom essentially has none. We had other plans though!!

I sautéed up onions, garlic, the usual herbs, more of the “chicken” and a tiny bit of wine and added it to a good quality canned pasta sauce. Then, I got out one of my awesome vintage Corningware casserole dishes, and put a lovely layer of the sauce on the bottom, and layered pieces of “chicken” across the sauce, covered each piece with a slice of fresh mozzarella, and more sauce. 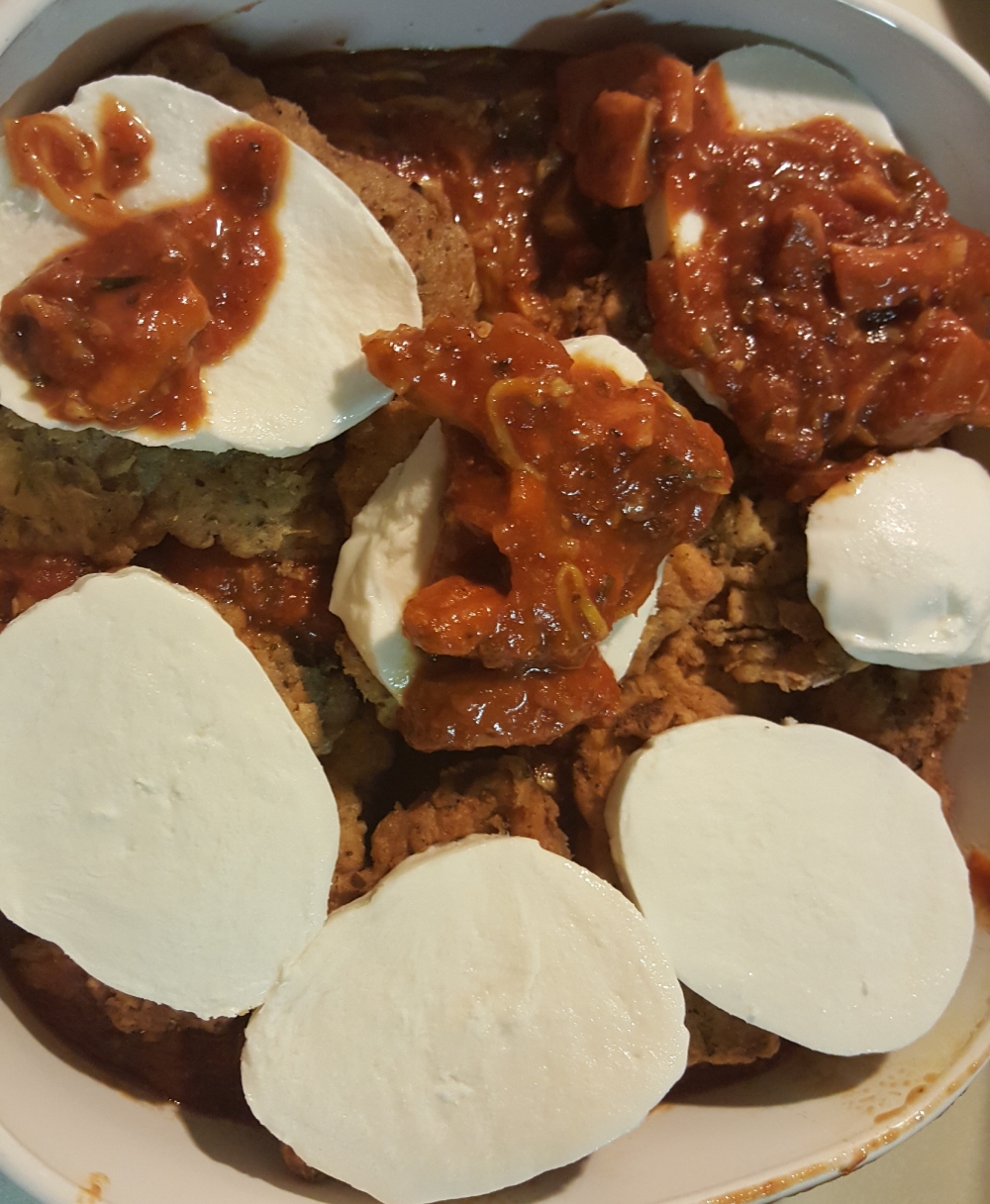 I would have loved to have used some really nice parmesan, but all I had was the stuff that is just shy of saw dust. I rolled with it, because it was what I had. 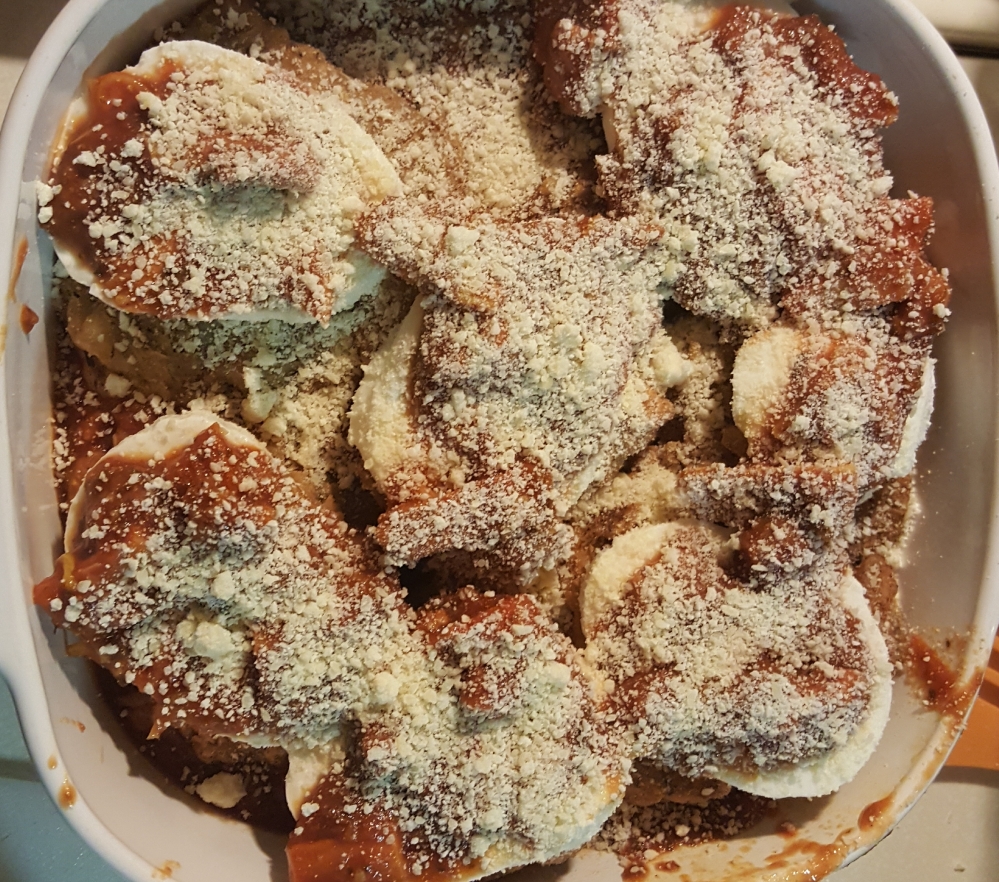 It was still stupid hot outside, and after frying the chicken, it was getting that way INSIDE, so I opted to pull a lazy move and put it in the microwave. Yes. I said I microwaved it. Judge me. I dare you. I let it go about 7 minutes, at which time it was bubbly and delicious. Made a lovely wild green salad and dinner was served! 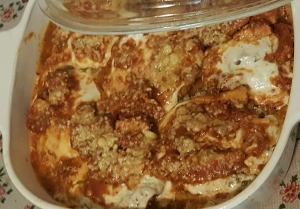 Hopefully you will find some “chicken” of your oen and give either fried “chicken” or “chicken” parm a whirl. It turned out better than I could have imagined.