NEVER EAT ANYTHING YOU ARE UNSURE OF! I TAKE NO RESPONSIBILITY FOR ANYTHING THAT HAPPENS TO YOU BECAUSE YOU DIDN’T CORRECTLY IDENTIFY SOMETHING! Lawyers made me say it.

Oysters are, bar none, my favorite mushroom. Great flavor, meatiness, pairs itself well with just about any flavor; oyster mushrooms are the BOMB. Wild oysters are bar none the best. If all you have ever had is the sad little “fresh” oysters from the store, I pity you. Right now, in the age of COVID19, mushroom hunting is a good way to get out, get some exercise, while still socially distance and staying safe.

Definitely do some research, order some books, join some mycological societies (many have active social media presences) and don’t eat anything you aren’t sure of.

One of the things I most like about oysters is that they are pretty much the honey badger of the mushroom world. They do what they want, when they want where they want to and don’t give a $hit what the books say they are supposed to do. Live tree? They will rock it. Dead tree? Yup. Spring? Sure. Summer? You know it! Fall? Why not! Winter?!? You Can’t tell me what to do! I’ll fruit if I want to!!!

I find them on so many more tree varieties than the guides tell you that I don’t even both to see what kind of tree it is. Supposedly eating any mushroom off a locust is bad news. I’ve never found any on a locust (well, not yet anyway) to test that. 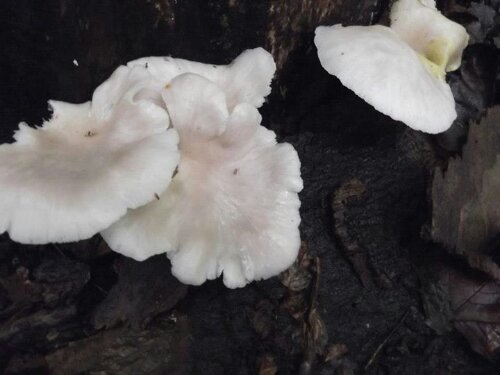 Oysters get their name from the shape of their fruit. It looks a little like an oyster shell, and they also smell a bit like fresh oysters.

They can be white, to tan to almost lavender. The flesh is always white. If in doubt, spore it out! Put a cap on a dark piece of paper and it will leave a white/lilac or grey colored spore print. They usually grow in clusters, but I have occasionally found them all alone on the top of a log on a raised stem. Oysters gonna do what oysters gonna do.

The key differences between P. ostreatus and P. pulmonarius are that pulmonarius prefers warmer weather, tends to be paler in color, with smaller caps, and larger stalks. Flavor, texture and growth habits are largely the same.

These lovelies were growing on a downed log that was WAY into rot. They were in the crux of a limb and the trunk which is what gives them the smushy shapes. You can see that they have a hint of tan coloring. 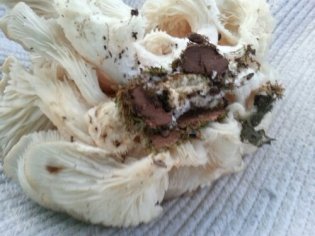 This is the underside. Normally I cut the fruit off of the wood so as not to disturb the mycorrhizal mat, but for the purposes of this blog I actually tore it off. Please, always cut your edible mushrooms.

You can see in this photo that the gills run from the edge of the cap down the stem. That is a key identification feature. You can also see that even though they are growing in a cluster, they have individual stems. The gills are irregular, but have the sharp edge of a true gill.

The above mushrooms are P. ostreatus, and are obviously darker in color, larger caps, smaller to barely there stalks, and these were harvested in November. They tend to prefer cooler temperatures, and therefore are sometimes called the “winter” oyster.

Texturally, these tend to be more stout, and almost rubbery. The smallest caps are larger than many O. pulmonarius clusters. 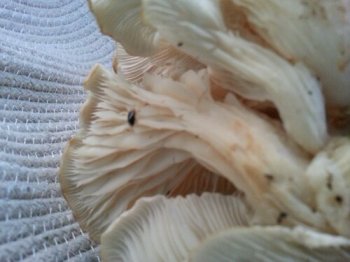 This is another key feature. As near as I can tell, this variety of beetle ONLY lives in oysters.

Little black bodies, red/orange heads. It is always a race to get there first. Oysters tend to be dirty mushroom anyway, but these little guys just don’t help.

Here is a better picture of a fellow running for his life. It can sometimes look like a horror movie when you flip your oysters because these bugs come raining out like a bucket of blood on a prom queen named Carrie.

Oysters can be so variable in shape and color that sometimes you have to go by the preponderance of evidence. Does it have a fishy kinda smell? Are the gills perfect or are they irregular? Is it a cluster but each has a stem of its very own? Do the gills run from the cap to the stem?

This a picture of a nearly perfect cluster of oysters. Round caps, offset on stem, white flesh, hint of tan, had a fishy smell, irregular gills that ran from the cap onto the stem, cluster of mushrooms with individual stems, stupid beetle… It screams CUT ME AND EAT ME IF YOU DARE YOU COWARD!!!!

Some mycophiles will tell you to brush them off and tear them with your hands. I’m a germaphobe and I have seen what those little bastard beetles are doing. I wash then, carefully, then usually slice them before sautéing (there it is again- I promise I do know other ways to cook) with shallots (sweet onions also work) garlic and olive oil. Butter works too, but it can’t take the heat. It makes a nice finishing fat once they have cooked down, even if you cook in olive oil.